I think I am not the only one who occasionally often dreams of living in an 18th century French farmhouse in the countryside surrounded by vineyards, fruit trees and vegetable gardens. The pure simplicity of growing and harvesting the food we need and waking up to sunrise over a stunning and natural landscape is part daydream and part bucket list.

Living in a corporate apartment in the city, our current reality is a bit far from that, but we were able to get a glimpse into French country living this past weekend when we took a drive up to Saint-Émilion and stayed in a converted farmhouse on a vineyard.

Saint-Émilion is one of the main red wine producing areas of Bordeaux on the right bank of the Gironde. It is named after the monk, Émilion (now a Catholic saint), who settled into a small living space carved from rock now under the streets of the city. The vineyards in the region are credited to the Romans who planted grapes there as early as the second century. 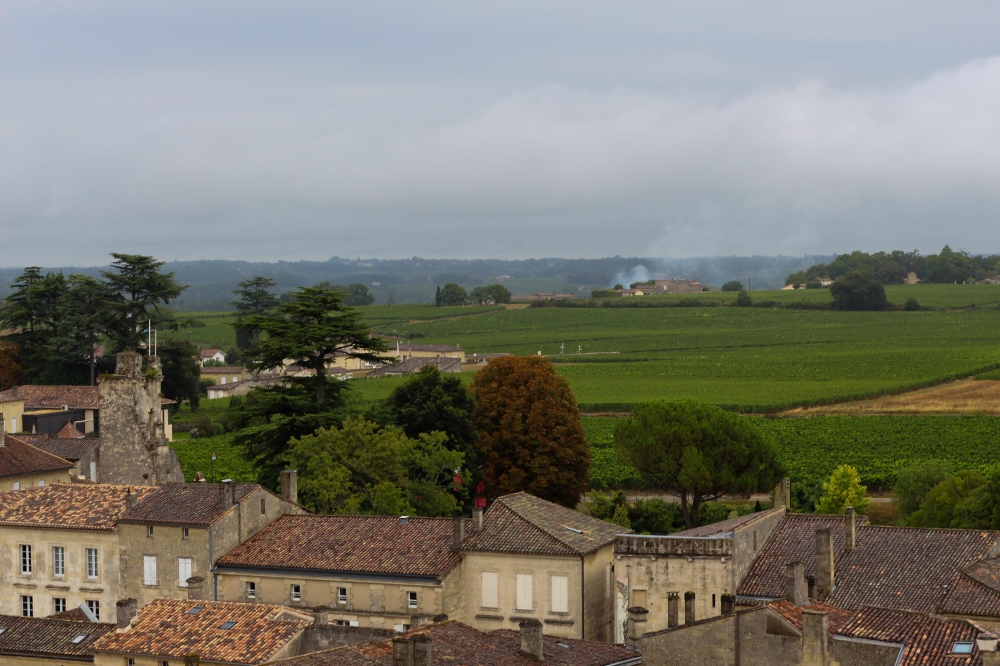 We left Toulouse early Saturday morning to make the two and a half hour trek up to Saint-Émilion. Our drive took us past the fading sunflowers whose heads were bent low as if bowing goodbye to the waning summer. Slowly the landscape changed from fields of wheat, corn and sunflowers to hectares and hectares of vines heavy with purple grapes that will be picked in about a month.

We drove into the ancient city with rain pelleting our windshield and the skies growing no less threatening. Our original plan was to ride bikes to tastings we had scheduled at a couple of vineyards, but the unexpected rain and chilly weather had us second-guessing the merits of this plan. Since we had rented bikes from the tourism office online earlier in the week when the weather looked promising, we decided to stop and see if they would allow us to use the credit from the bikes towards a different tour or activity.

Unfortunately this tourism office seems to be in the business for making money for itself rather than serving as a public relations arm for the region because, even though they could see the rain coming down and noted that the weather wasn’t forecasted to get any better the rest of the day, they couldn’t refund us (which I’d assumed) nor could they apply the money we already paid towards another tour (which shocked me considering their job should be making sure tourists have a positive experience in their town). So we ended up eating the nearly 40€ we paid for two bikes for the day.

They did give us the key to the bell tower so we could climb to the top and get a panoramic view of the city and region, but that would have only set us back 3€ for the two of us. Not quite an equal substitution in my opinion. The views were beautiful, but we started out the day with a bit of a sour taste in our mouth.

Fortunately we had our first tour of the day to look forward to and, after returning the key to the tourism office, we headed out to Chateau Coutet, an organic, family-owned vineyard just about a kilometer from the city.

Chateau Coutet is a very old vineyard estate that has been in the family for 400 years! Some of the oldest vines on the estate are nearly 90 years old and the vineyard extends of three types of soil: limestone, clay and sand. The types of grapes grown at Chateau Coutet are Merlot, Cabernet Franc, Malbec and Cabernet Sauvignon. 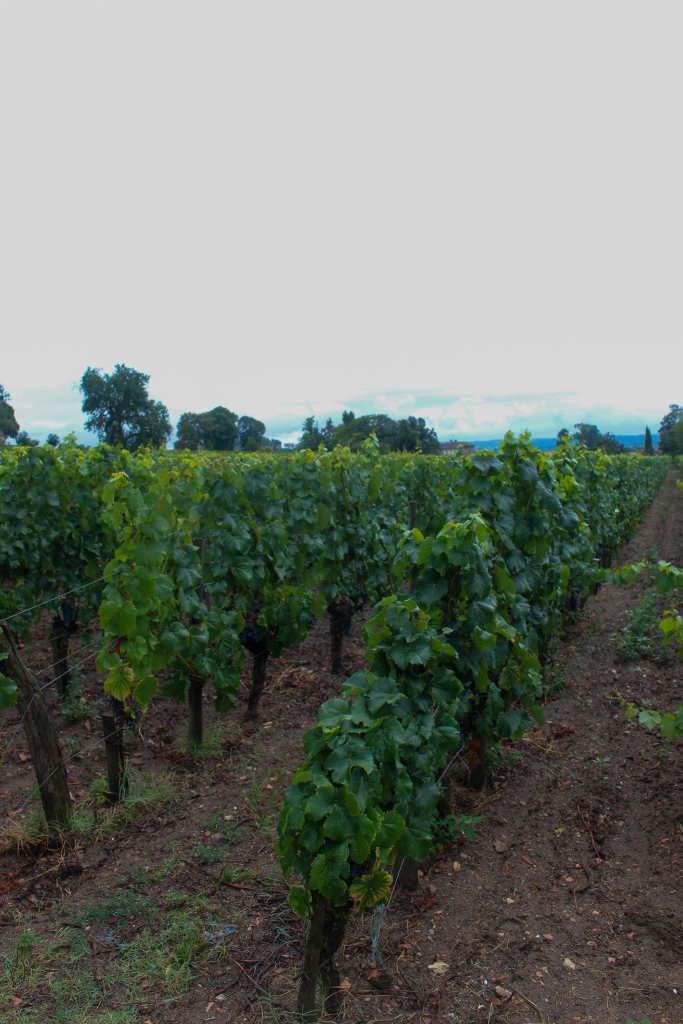 In order to remain organic for 14 generations, one-third of the estate (or about 4 hectares) is not vineyard. Instead they grow flowers and vegetables and have trees and animals to help create a rich biodiversity. They even have their own stream to collect rainwater and use that as needed for their plants and animals.

Our tour guide, Juliette, is part of the family and she did a wonderful job explaining the process they use to grow, harvest and turn their grapes into wine. After walking us out to the vineyards and around the grounds, she took us into the cellar where they press and ferment the grapes and to the family cellar where they have bottles of wines created over many decades. The oldest bottles in there currently appeared to be from the 1960’s, however Juliette told us that they once discovered a bottle from the 1750’s buried under the floor. It still contained wine (though at this point it would be undrinkable) and the glass cork, which was common for that period. 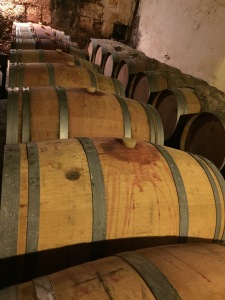 Saint-Émilion Grand Crus apparently age well and most taste best after 10-15 years. If you want to wait that long, you can buy a younger bottle and let it sit in your own cellar. For those who are a bit more impatient to taste the good stuff, you can fork out the big bucks and buy a well-aged bottle.

After our tour, it was time for our tasting and we were poured samples of both the 2008 and 2009 Grand Cru, which were both delightful. It was interesting to taste the difference between the two years (the 2009 was more well-rounded and smooth) based simply on the weather in each of those years. We ended up purchasing a bottle of the 2009 to bring home—I can’t promise it’ll last another four to nine years in our cellar, though. After saying our farewells and getting recommendations on lunch, we headed back into town. At this point it was pretty hard to find a place to park, so we ended up almost behind the city—but parking there was free! The rain was still coming down and the weather hadn’t warmed up much, so we made our way into the city hoping for a place to warm up and eat.

Unfortunately the restaurant we wanted to go to didn’t have space for us, so we ended up at a little pub where Matt ordered the plate of the day (duck confit and scalloped potatoes) and I had a salad with smoked duck and croutons. We each washed our meal down with a glass of Saint-Émilion red.

Our next stop was Chateau Haut-Sarpe, which was also where we had reservations for the night. Though our room wasn’t ready, the caretaker Jean-Philippe took us on the best wine tour we’ve been on yet.

His English was about as good as our French, but we still had a delightful time and conversation. We were forced to practice our French a bit more due to the language barrier and it was fun to see how much we could understand as Jean-Philippe gave us the tour (for me it ended up being about 80%!).

We learned the chateau we were staying at has been in the family for five generations and they have done so well that today they own 10 chateaus across France!

As with many tours, we talked about the terroir, the process for collecting and pressing the grapes and walked through the facilities into the barrel room, but this is where it got really interesting. We were given samples of the un-blended wine directly from the barrels, which allowed us to taste the Merlot and Cabernet Sauvignon on their own. Then we were given a sample from each of the two barrels in the same glass and were able to taste it blended. Tasting the wines separately and then together really brought the flavors in the wine alive and we were able to understand what attributes each brought to the final blend. 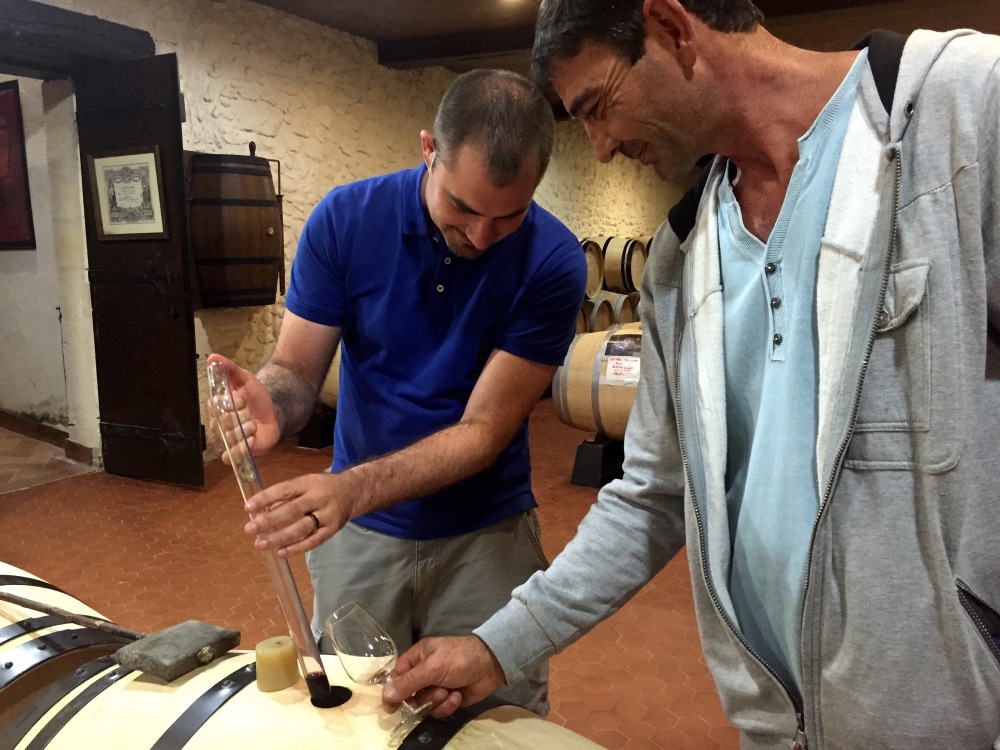 We moved on from the barrel room to the tasting room (but not before getting a little peak at the owner’s old cars!) and got to taste the bottled, aged wine, with which we now had a more personal understanding and connection.

By the time we were done with our wine tasting, our room was ready and Jean-Philippe took us up to a renovated farmhouse on the property where we were staying in an upstairs room. The stairs were narrow and wooden, the walls a white-washed stone and the doorways low. Our room had a fireplace that had since been filled in (seeing a couple of ominous-looking char marks on the wooden floors made us guess why) and large, paned windows that opened out to a view of the vineyards. It was beautiful and cozy and everything I could ever imagine it would be to live in an old French farmhouse. 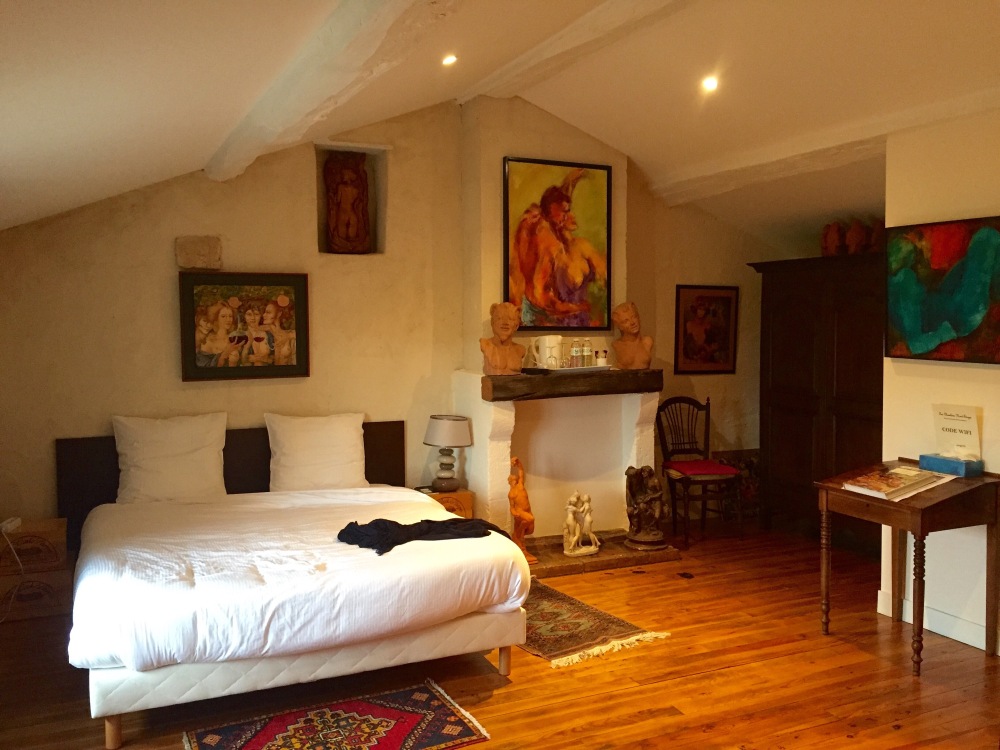 Once Jean-Philippe handed us the keys (which were old, brass skeleton keys!), we sat on the bed to enjoy a glass of wine, admire the dreamy landscape and make our dinner plans.

While we debated going to a restaurant, the weather was getting worse and we really wanted to enjoy our room so we ran to a store and bought cheese, meat and a baguette and brought it back to eat while sipping on glasses of wine and looking out the window. We spent the rest of the evening talking and enjoying the simple romance of our surroundings.

Sunday morning dawned on just as drizzly and grey as the day before—perfect for a day of snuggling and movies, but we had a tour of underground Saint-Émilion to take before we could hit the road and head home.

After checking out at the chateau, we attended mass at the Catholic Church in Saint-Émilion where we got to witness a baptism and watch organist, who looked like he hopped off the stage of Phantom of the Opera as he played, create beautiful music.

With two hours to kill before our tour and the rain coming down even harder, we went in search of a cozy restaurant for lunch and ended up stopping at Amelia Canta. We both ordered the menu of the day and had a perfect, rainy day meal of vegetable soup, sausage with mashed potatoes and a chocolate-stuffed crepe. 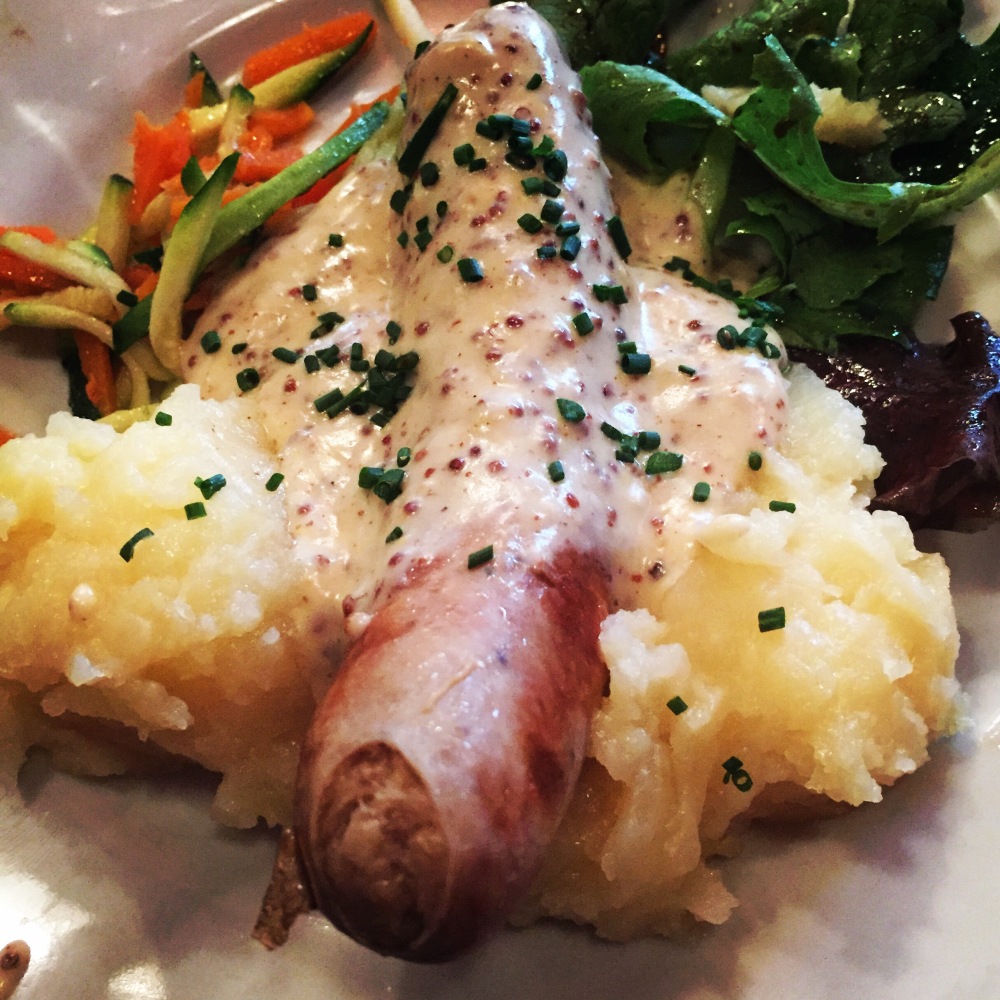 Our tour of underground Saint-Émilion took us to Saint Émilion’s cave-home (which still had his stone bed and a prayer seat carved out of the wall that can supposedly boost a woman’s fertility should she sit on it and pray), a 12th century chapel that still had some of its medieval paintings on the walls, part of the underground crypts and an incredible underground church that was dug out of the earth rather than built above ground (the bell tower we visited on the first day actually sits above it). Unfortunately we weren’t allowed to take pictures, but it was incredible to be walking through parts of the city that were so old.

At the end of our tour, our guide mentioned something rather surprising; only 10% of the visitors that come to this old city tour the historic parts. Most just come in to visit the vineyards. The wines from this region are wonderful and the vineyards are great, but if you ever find yourself in Saint-Émilion, I recommend taking time to sample the local history as well.

History learned, wines tasted and vineyards toured, we hopped back into our car and made the rainy trek home. We will have a lot of great memories by the time we are done with our world tour, but Saint- Émilion I’m sure is one that will stand out as we walked in the footsteps of both the wine growers and saints.