Part of the craziness of Matt’s new job is not knowing where we’re headed next. A few weeks ago we got a calendar outlining our assignments after Toulouse, but just yesterday Matt found out things might change again.

Unfortunately the change means we might be headed out of Toulouse for about six weeks to stay temporarily in a country on another continent. I won’t say more until I know if/when it’s happening, though.

Though it’s sad we might not have as much time in France as we thought, we have been able to do a lot of fun things—and a new location sets us up for more adventure!

One of the places we’ve gone to since we moved to Toulouse is the walled city of Carcassone. Located just about an hour from Toulouse, Carcassone is a dream come true for fans of the Middle Ages (and those who enjoy history and old architecture). 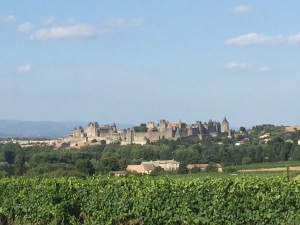 Occupied since the ancient times, the city has had multiple rulers—including the Romans and later the Visgoths. The Trencavel family, one of the most powerful families in the South of France during the Medieval period, took control of the city in 1067 and built Château Comtal, which still stands today. The family held the city until 1209 when they surrendered it during an attack ordered by Pope Innocent III. Following the surrender, the castle and surrounding city were fortified further with a double ramparts.

In the 1800’s, the city was almost demolished, but an uproar by French citizens led to it being protected as a historic monument. Restorations began by architect Eugène Viollet-le-Duc in 1853 and he returned the city to its medieval appearance (and the tourist destination it is today). In 1997 Carcassone officially received its listing as a UNESCO World Heritage Site.

Fun fact: portions of the movie Robin Hood: Prince of Thieves (1991) were shot in and around Carcassonne.

We visited the city on a hot, sunny afternoon on our way back from Port Leucate. Our drive took us through the lower town, which is pretty but probably an afterthought for most of those visiting the upper, walled city (admittedly—us included).

Our drive took us up the hill and we parked outside the towering ramparts. The medieval portion of the city towers above everything below it, not just because of its massive walls, but because it is perched on a hill above the valley below. You can see it clearly from the highway as you drive from Toulouse towards the Mediterranean.

We purchased our tickets and learned that there was a jousting tournament scheduled for later in the afternoon (a Grand Tournoi de Chevalerie to be exact). Our timing of our trip was impeccable!

We entered through the main gate and walked through the clearing between the two rows of ramparts before we entered the bustling city. It was packed! Buildings squeezed together on either side of the cobblestone streets and throngs of tourists filled every last corner, from the alleys to the souvenir and sweet shops.

We were pretty hungry after our morning drive, so we went in search of lunch. The restaurants all had fairly similar menus featuring typical French faire, including the local specialty Cassoulet. Most of the restaurants in the center of town were packed, so we ducked off a side street and ended up finding a little restaurant, quietly located at a dead-end of one of the alleys.

The food was mediocre and the service pretty poor, so we got out of there as quickly as we could and headed to the Chateau. There was a line to get in, but it moved quickly and soon we were standing in front of the castle with our audio guides. 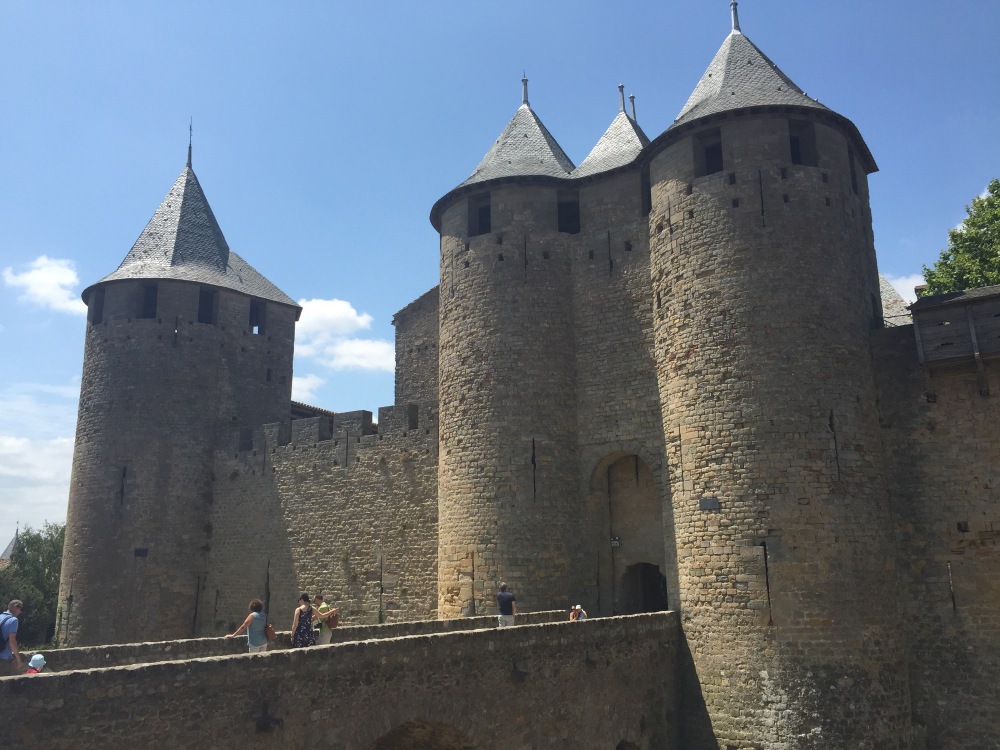 The architect Viollet-le-Duc tried to stay as true as possible to the way the castle would have looked during Medieval times, so it’s very well restored. We enjoyed walking through the stone rooms and along the parapets. Of course, I imagined the swish of my beautiful gown as we wondered through the building. 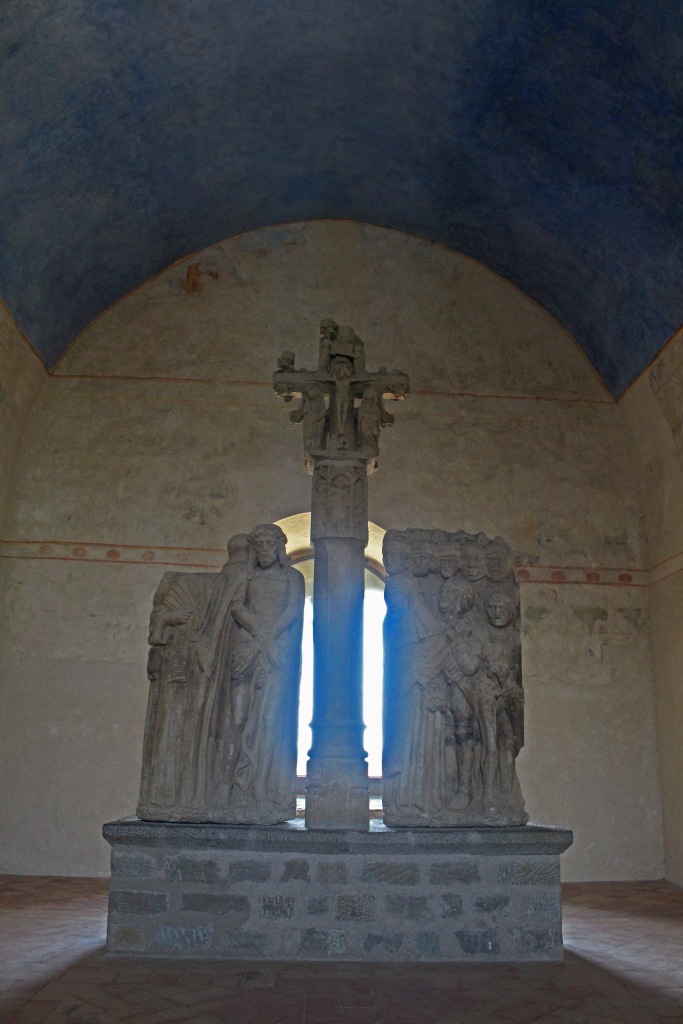 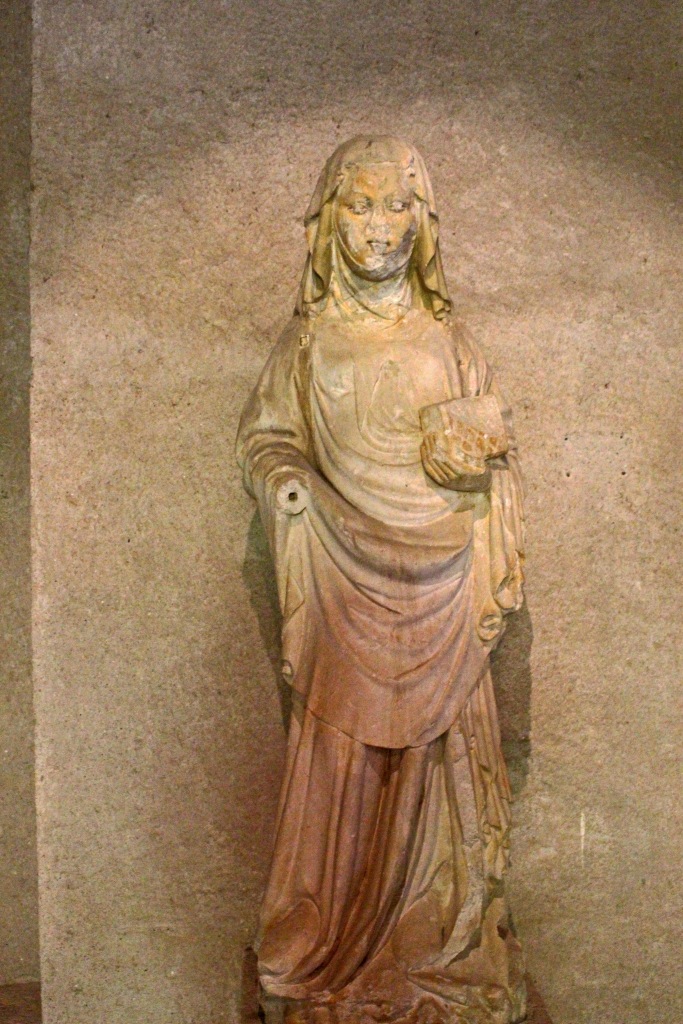 We were even able to climb from the castle up to the ramparts and walk along them, getting some seriously beautiful views of the valley below. 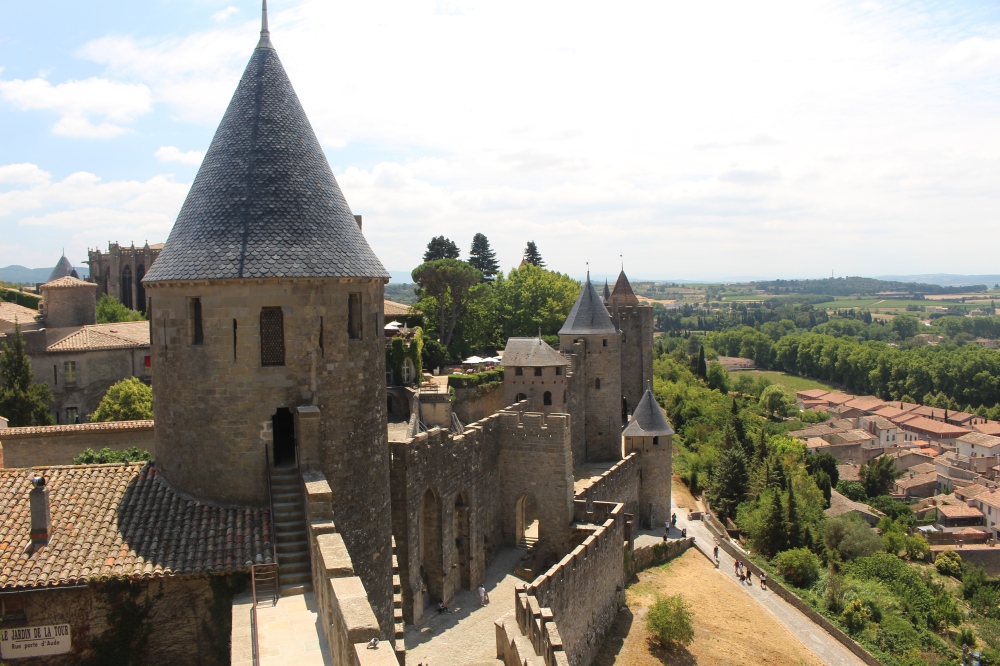 Following the castle, we made our way to the Basilique Saint-Nazaire and took a peek inside the old church. It is nicknamed the “Jewel of the Medieval City.”

After the church, we cooled down with a couple of bottles of water and some scoops of ice cream while we waited for the afternoon jousting. When it was time, we walked back out to the alley between the inner and outer ramparts and were eventually showed into a small arena, flanked on either side with shaded bandstands. We took our seats on the one of the long benches in the bandstands and soon the entertainment began. 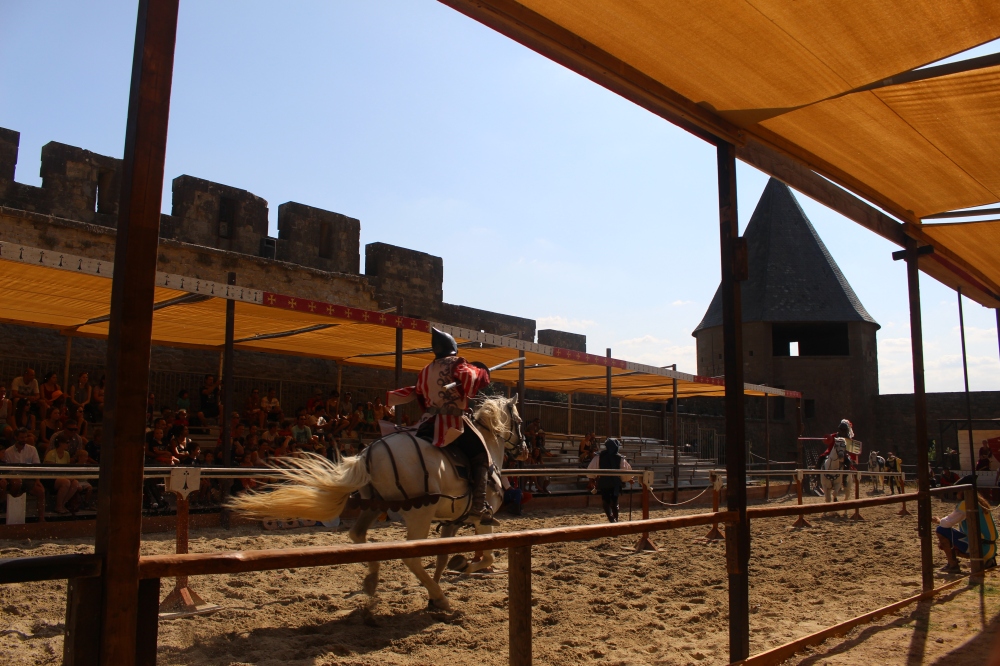 The show kicked off with an introduction in several languages, including English, but all of the dialogue between characters was in French. I can assure you that, though we didn’t understand every word, the show was as gloriously cheesy as they are at medieval fairs in the U.S. It just goes to show, no matter where you are in the world and no matter how pretty the language, you can still get your fairy tale kicks. 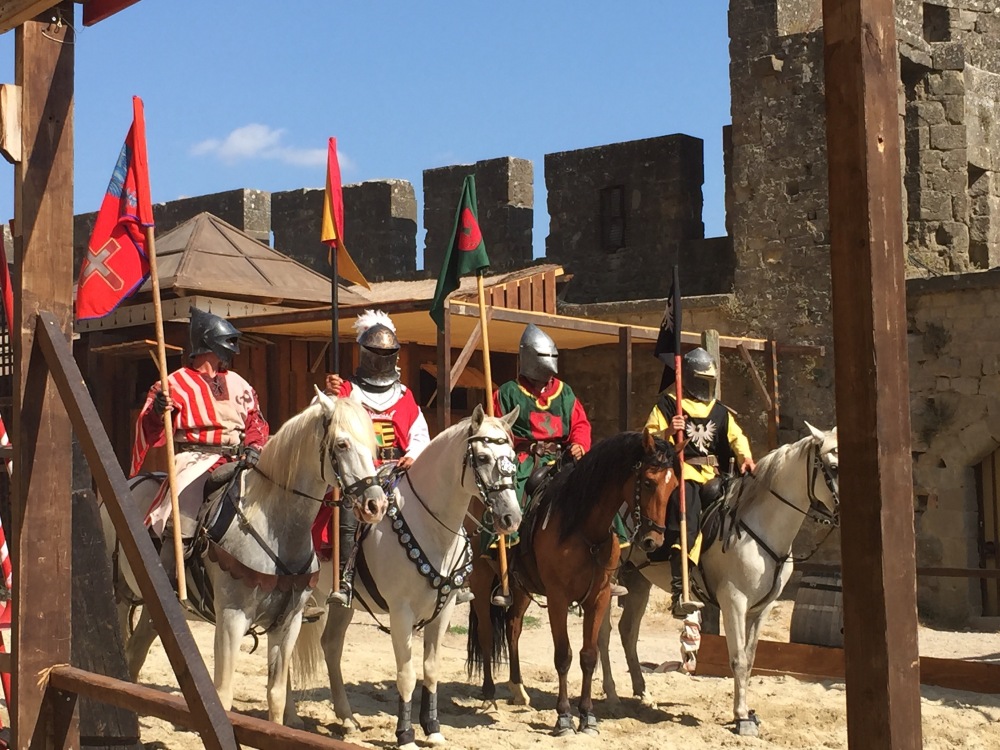 The dialogue and storyline may have been pretty silly, but the actors turned out to be very talented horsemen.

If you ever have a chance to live or stay in Toulouse for an extended period of time, I recommend adding Carcassone to your list. Even if you get fed up pushing your way through the crowds, you can find a winery near the city and take in great views like this.