Matt and I travel a lot. We were discussing just how much the other day and realized that, since January 2015 alone, we’ve traveled to a different state or—starting at the end of May—a different country every month. Granted, some of that has been dictated by work, but I think we also get a little restless if we’ve been in one spot for too long.

It’s kind of surprising, then, that we laid low the first couple weekends of January. I guess we needed a little break. We also have a very long journey at the end of this week to Phoenix, Arizona to visit my parents. It’s going to take us about 19 hours to get there —so maybe it was a subconscious effort to build up our strength for that!

Cabin fever finally set in this past weekend, though, and we decided to take a day trip to Lourdes, France. Located about an hour and a half south of Toulouse, Lourdes is a small town in the foothills of the Pyrenees.

When Matt first suggested a trip there, I recognized the name but couldn’t place why. Thanks to a quick Google search (and the kind people who keep Wikipedia updated), I soon had my answer. This is the city that became famous for sightings of the Virgin Mary by Marie-Bernadette Soubrious—who later was canonized as Saint Bernadette. I remembered it from watching “Song of Bernadette” in Catholic School as a child.

In 1858 Bernadette, a young peasant girl, was out collecting wood with her sister and a friend one evening. As she stopped to remove her shoes to cross a stream, an indescribably beautiful Lady appeared to her. Bernadette was frightened and tried to keep the vision a secret, but her sister told their mother and Bernadette was punished.

She went back again and saw the vision once more, but this time she tossed holy water at it and told the Lady to stay if she was from God, but to go if not. The Lady just smiled and bowed. Though it became a bit of a controversy and many were initially skeptical (including the Catholic Church), Bernadette kept going back to the spring and saw the Lady a total of 18 times.

In addition to asking Bernadette to dig in the ground and drink from a spring there, the Lady asked the girl to have a church erected on the site in her honor.

The Grotto quickly became a focal point for visitors and many miraculous cures were reported from those who drank from the water. The Catholic Church eventually recognized the appearances and found nearly 70 of the reported cures miraculous.

Millions of pilgrims now flock to this site annually making Lourdes one of the greatest pilgrimage sites in the world. Visitors can pray at the church that was built above the spring or at the Grotto where the Virgin appeared. They can also bathe in the springs or take home bottles of the spring water from numerous taps stationed near the Grotto.

It was pretty quiet when we visited and most of the businesses in the town were closed for the off-season. So it was nice to peacefully stroll around the campus and pay our respects in the church and crypt (which contains relics of St. Bernadette). 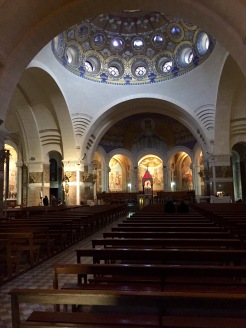 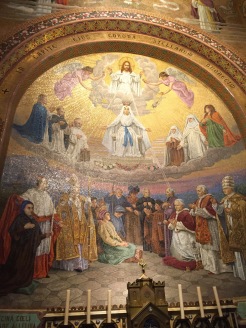 Unsurprisingly (though kind of disappointing), the town is rife with souvenir shops making commercial profit off of the popularity of the holy site. Though the campus which surrounds the Grotto is pretty and peaceful, the town had the commercial feel of a ski village.

The drive in to Lourdes was beautiful and gave great views of the Pyrenees Mountains where many of the peaks are covered in winter snow.

We really enjoyed our trip to Lourdes and it’s a great escape if you’re in Southern France. If you’re looking for a peaceful retreat, I would just recommend going in the off-season—otherwise prepare to be surrounded by throngs of other visitors.

We left with a couple of bottles of the spring water which we’ll bring to my dad when we visit later this week. He’s suffered his share of health issues in the past year, so perhaps we can bring a bit of a Bernadette’s miracle to him.