Mexico City, like much of the country, is a place of great contrasts: lavish wealth and devastating poverty; clear-day mountain views and thick, obscuring smog; inexpensive and hearty street food and pricey, avant-garde fare.

It was the contrast in food we were after on one of the days we spent in Mexico City in December—December 12 to be exact. Matt’s and my second wedding anniversary.

As a surprise to Matt, I booked us a street food tour with Eat Mexico. We’ve done food tours in several different cities, including Barcelona and San Sebastian, and find them a great way to see the city and learn more about the local culture. After all, food is one of the best windows into a country and its people.

The Eat Mexico tour didn’t disappoint. I have to give a shout out to them for great customer service. Since we were traveling with our five-month-old, I needed to find a tour that was baby and stroller friendly. Christine at Eat Mexico contacted me personally to help me make my decision and sent several follow ups to make sure we were all set before it started. I opted to purchase the Eat Mexico cookbook (by Lesley Tellez. Check out my Instagram feed for the recipes we’ve already tried) cookbook and we absolutely love it! Christine had it delivered to our hotel so we could pick it up on arrival.

The morning of our tour, we met our guide Ubish Yaren, near the iconic Angel of Independence. Ubish is a chef and expert on Mexico City. As luck would have it, we were the only ones who booked the street food experience that day, so we got a personalized tour.

We started at a tamale stand near the U.S. embassy, but it had been a busy morning, so the tamales were unfortunately already sold out. Though a bit disappointing, we forged on and made our way to the Mercado Cuauhtémoc, where we tried fresh-pressed tortillas and chicharrón (pork skins), as well as admired the beautiful piñatas and the yellow, marigold-fed chicken. 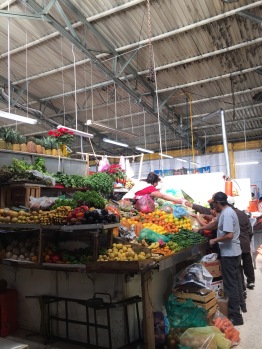 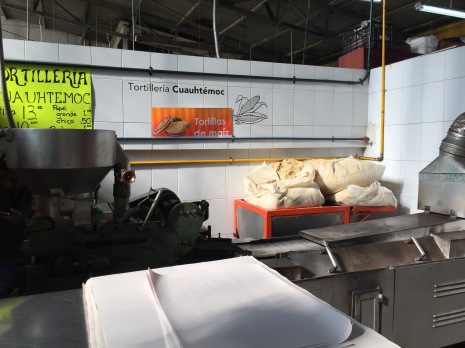 Our next stop were stalls serving fresh juice and tlacoyos and quesadillas (which are totally different from the quesadillas typically served in the U.S.). We tried our tlacoyo (a thicker tortilla stuffed with beans and other toppings) with nopal and cheese. Our quesadilla we had filled with cheese and chicken. We washed those down with smoothie-like juices. 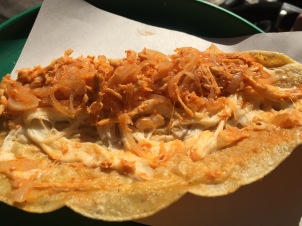 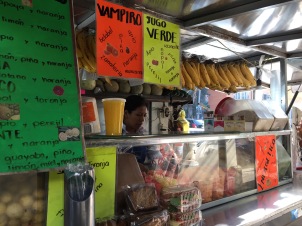 Next up were tacos de canasta (or “sweaty tacos”). These pre-made tacos are kept warm in large baskets where they pretty much steam themselves until they are served. They were soft, savory and delicious!

It was a good thing we ate a really light breakfast, because we continued our journey to a stall selling pork carnitas. Here you can pick your own cuts of pig (everything from the belly and intestines to ear and snout) and the vendor chops it up on a rounded, wooden block and plops it into a double-layered tortilla. From there you can top it with a variety of salsas, onions, limes and pickled jalapenos and carrots. We tried several cuts, including belly, shoulder and ear. The ear was not for the faint of stomach; the cartilage was crunchy and a few pieces had bits of pig hair sticking out. Still, the carnitas were quite delicious. 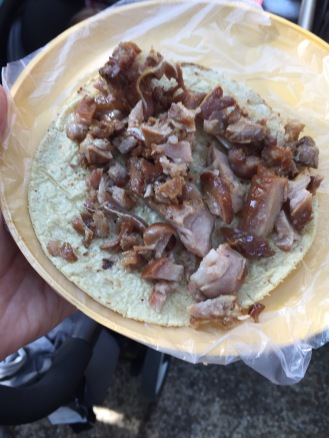 Next up, we cleansed our palates with chopped fruit sprinkled with chili and lime. In Mexico, chili is a topping for nearly everything. Though we aren’t used to adding chili to fruit, the contrast of the spicy and sweet was surprisingly pleasant.

Though we probably should have been getting pretty full at this point, we were still hanging in there. As food tour veterans, we know the secret to lasting is a pair of comfortable shoes and starting with an empty stomach.

Our tour continued at a burrito stand where we shared a large tortilla stuffed with squash blossom flowers and cheese and (here’s the best part) sealed with grilled cheese. I don’t think I can ever eat a burrito again without it being sealed with cheese. I seriously don’t know how this hasn’t caught on in the U.S. yet (though I suppose it’s a little like the “new” raclette craze in the States). 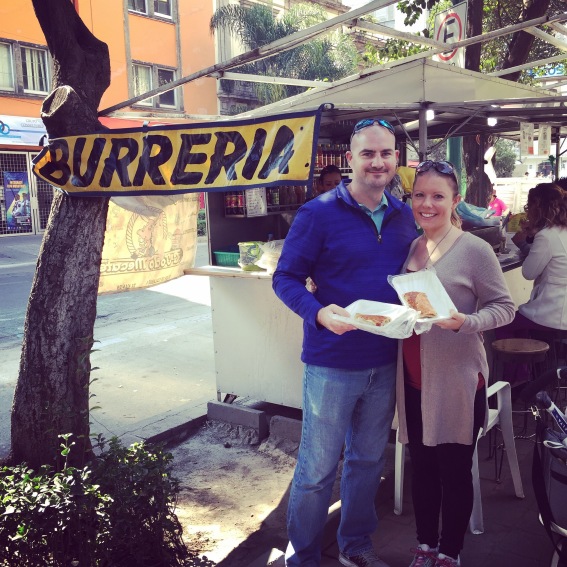 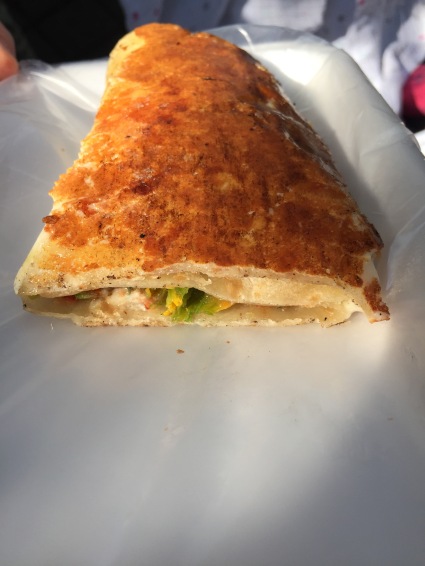 Admittedly, the burrito was pretty close to topping us off, but we still had a few stops to go. We followed the burrito up with coffee and churros, then made our way to a stand selling shrimp and avocado tostadas. I only managed a couple bites of the tostada, though it was pretty good.

Finally, we wrapped up the tour at a store selling traditional, Mexican sweets. The candies in Mexico are pretty different from what we were used to eating in the U.S. and Europe. Many of these were made with sugared fruit and even vegetable pastes (such as sweet potato). We picked out two candies and decided to save them for later because we had finally hit our food limit. 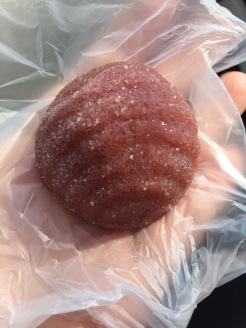 After saying farewell to Ubish, we took a long stroll back to our hotel hoping to digest our food before a special anniversary dinner at Limosneros. This highly rated restaurant serves creative twists on traditional Mexican dishes in a hip and romantic atmosphere. 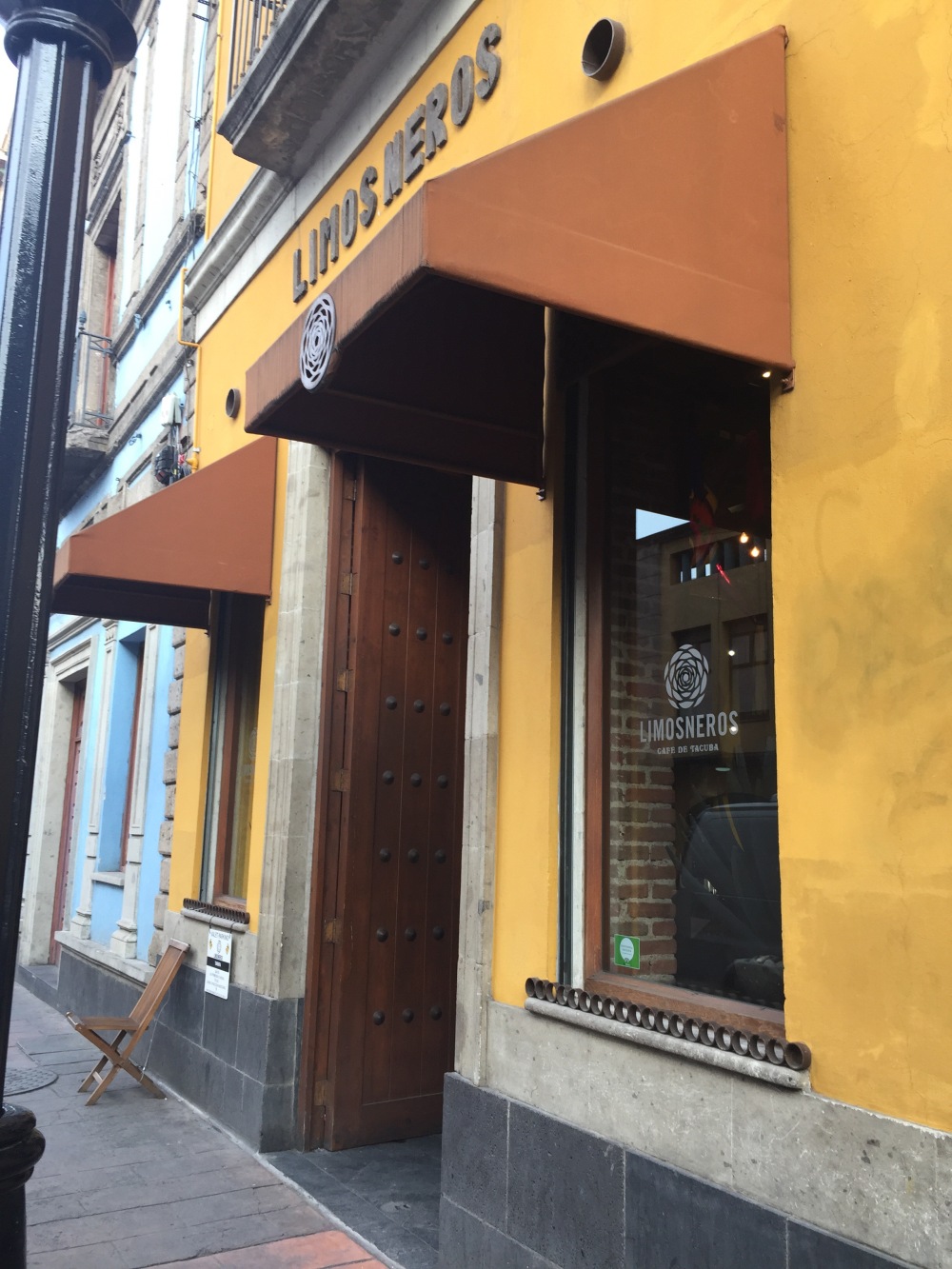 Dim lighting bouncing off of stone walls set the scene for our anniversary dinner. We opted for a tasting menu and wine paring, though there were plenty of dishes offered à la carte.

Our first course was an ant egg tortilla stuffed with mushrooms and swimming in an ant mole. This is the first time I’ve knowingly eaten insects, so was surprised how much I enjoyed the tortilla, mole and even the crispy bits of ant garnishing the plate. 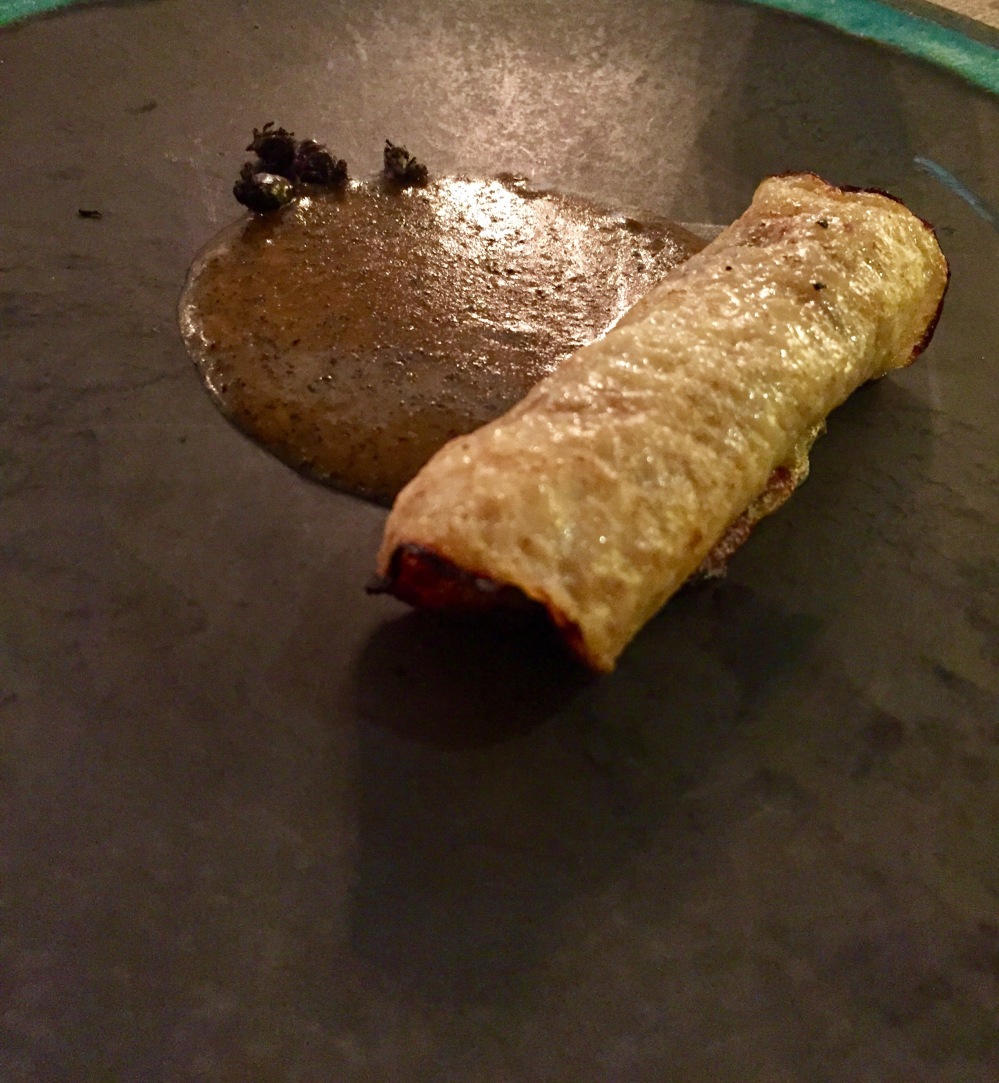 The tortilla was followed by an incredible shrimp pozole. Squash blossom flowers floated in a delightfully savory shrimp broth.

Next, we enjoyed steamed sea bass with a green bean mole. The fish was light and tender and was perfectly complemented by the small green salad on the side.

Cuts of wagyu beef with a potato terrine and amaranth “pico de gallo” were served next. Matt’s beef was a little overcooked, but mine was perfect.

Our fourth course was a lamb T-bone crusted in pasilla chili and paired with prickly pear salad and guacamole.

Finally, we ended our meal with pears and apples and, because I was really craving chocolate, we ordered a second dessert—a chocolate financier complemented with cardamom and cocoa ice cream. 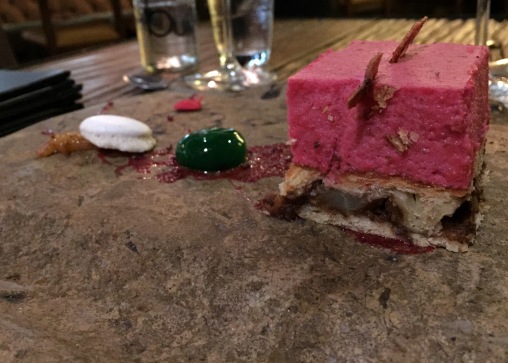 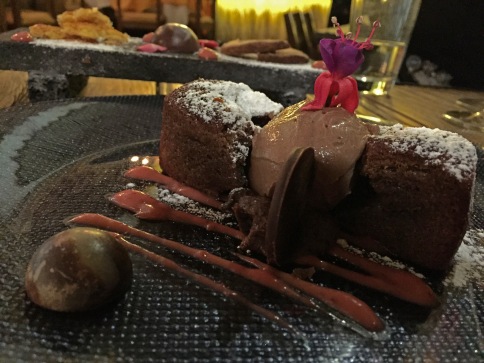 Luckily, because we were operating on our baby’s schedule, our dinner was early enough that we had time to digest all of that food before going to bed. Admittedly, we ended our day sharing glasses of champagne on the bathroom floor after Baby Girl was tucked in for the night. We reminisced about another incredible year of marriage and the wonderful day we had experiencing the variety and contrast of food in Mexico City. Provecho!