If I close my eyes, I can almost feel the chilly breeze whipping my hair and smell the salty ocean breeze mixing with wind-blown grass. Memories taking me back to the day we stood on sheer cliffs and stared out at the wide-open expanse of the Atlantic Ocean.

Our fourth day in Ireland was slated to be a trip up the Wild Atlantic Seaway, past the Cliffs of Moher and towards Galway. We didn’t have a solid agenda, just stops we wanted to hit along the way. Adventure at its finest.

We left Blarney early in the morning and took the N20 towards Limerick and then headed west to the coast. Along the way we took in breathtaking views of mountains and farmlands and passed through a couple of rain showers which ended with the requisite rainbow. 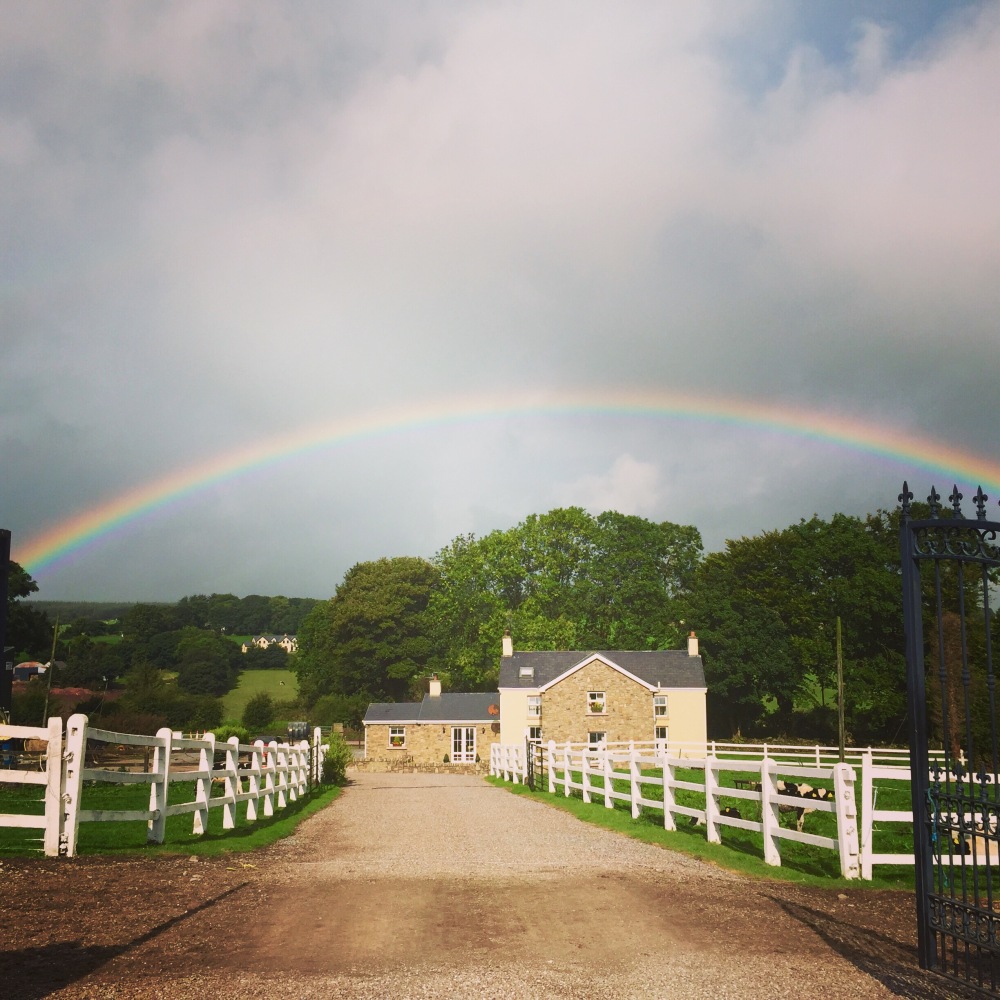 Just outside of Shannon we noticed a castle towering off the side of the road. Now, driving through Ireland you see your fair share of ruins; castles, churches, monasteries, etc., but this one was different. Even from the road, we could see it was clearly intact. Having been on the road for a little over an hour at that point, we were both ready for a break, so we decided to take a detour to the castle, which we soon learned was called Bunratty.

We parked outside and made our way to the entrance to buy tickets and scope out a restroom. We were expecting to go on a typical tour of a crumbling, partially restored castle. What we found instead was so much better.

Bunratty Castle, originally built in 1425, was restored in 1954 to what it might have looked like in the 15th and 16th centuries. It sits amid a “Folk Park” depicting Irish life in the 18th and 19th centuries; from farmhouses and cottages to a beautiful mansion on the opposite side of the property. 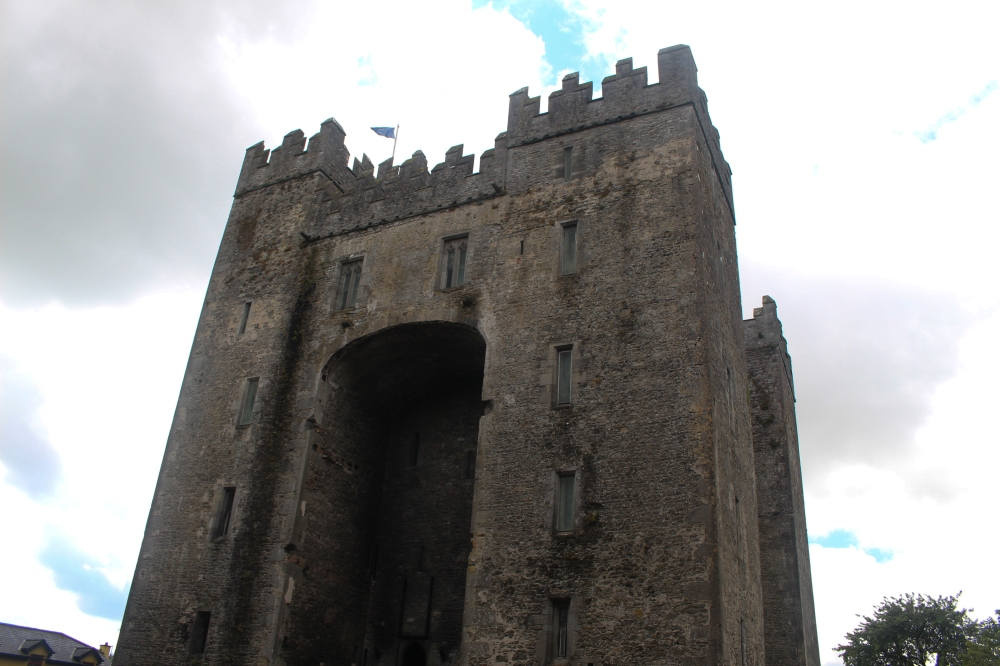 We strolled past a few of the old farmhouses before making our way to the castle, getting treated to a sample of freshly made soda bread along the way. 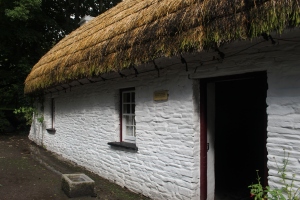 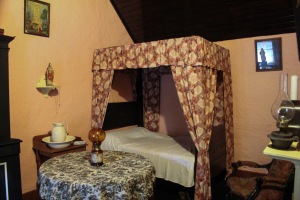 Reaching the castle, we first entered the dining room where we could practically smell the foods and hear the music that would have been part of courtly life. 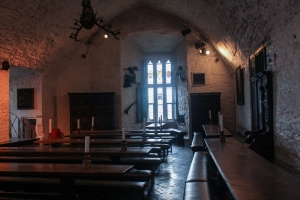 Off the side of the room, a small set of stairs led down to a dungeon. It must have been torture for the prisoners to smell and hear the activity above them while they sat chained just steps away. 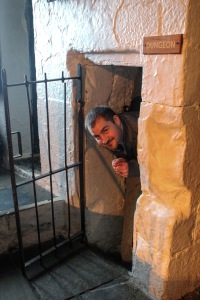 We made our way up the great hall where gorgeous tapestries decorated the walls and a fireplace was dug into the floor in the center of the room. The fireplace was not only used as heat and light for the room, it also had two stakes on either side on which peat would have been burned to scent the room. Probably smart considering baths were far and few between in those days. 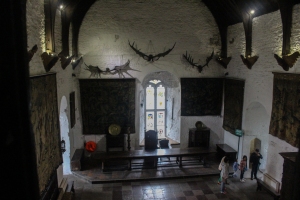 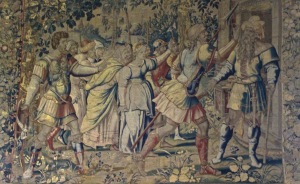 Our tour took us up many winding staircases (definitely not my favorite part of old castles) and into the well-restored rooms of the lord, lady and household staff who used to live there. 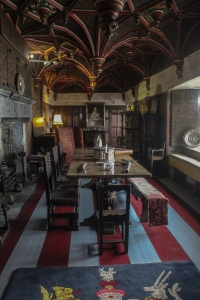 This castle was one of our favorites so far that we’ve visited in Europe because the restoration made it possible to imagine what life must have been like back then. Dresses stretched on the bed and game strung up in the kitchen made it feel like perhaps the family was just temporarily away and would soon be back to entertain the many guests visiting. I had fun imaging the swish of my own gown as we wandered around the castle. 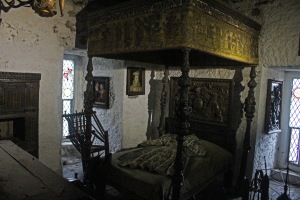 The view from the top was quite stunning as well. 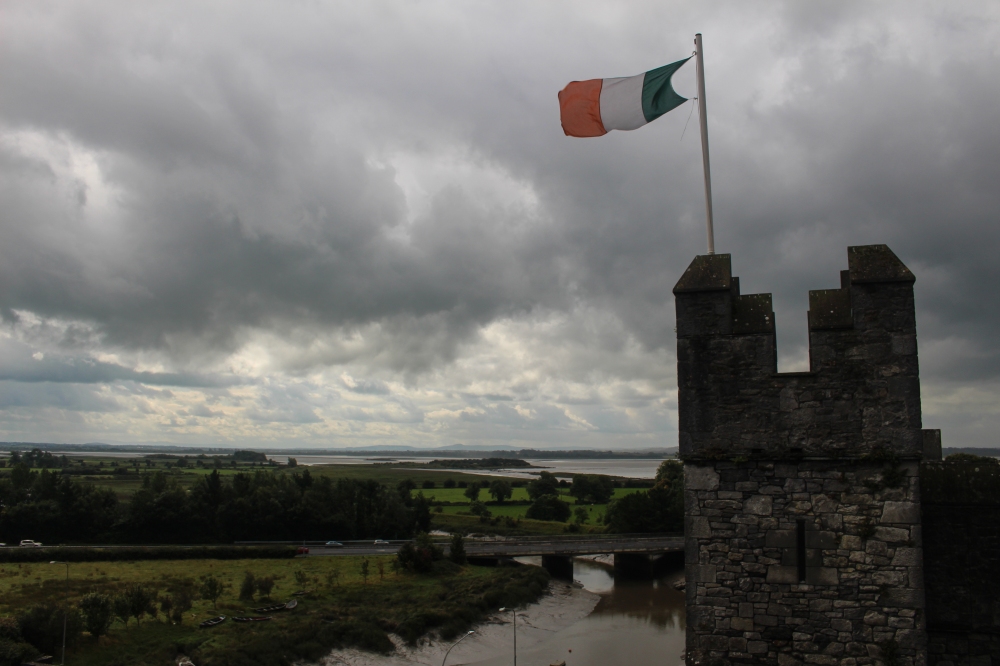 After we were done visiting the castle, we made our way to the village where we peeked into an old schoolhouse and doctor’s home. We even stopped at the pub for a glass of mead (big surprise, I know). 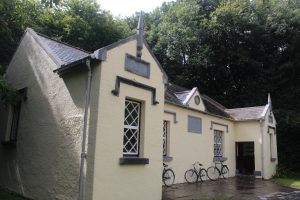 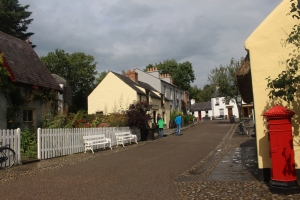 We wandered out to the mansion, but only peered at it from a distance as we still had a lot on our agenda for the rest of the day. 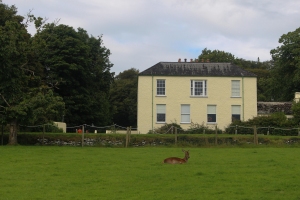 Before we left, however, we made sure to stop for a bite at the tea room where we dined on pulled pork sandwiches (we could smell and see lunch roasting on a spit outside) and fresh apple tarts that we saw two women preparing in one of the old houses. 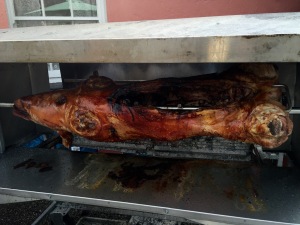 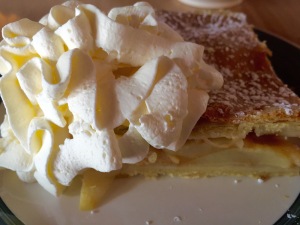 After lunch and our much enjoyed detour, we headed to the Cliffs of Moher. The Cliffs are one of the most visited natural attractions in Ireland and it’s easy to see why. They tower 702 feet at their highest point above the Atlantic Ocean and stretch 5 miles along the western seaboard of County Clare. Standing atop them, you can view the Aran Islands, Galway Bay and beautiful ocean as far as the eye can see. 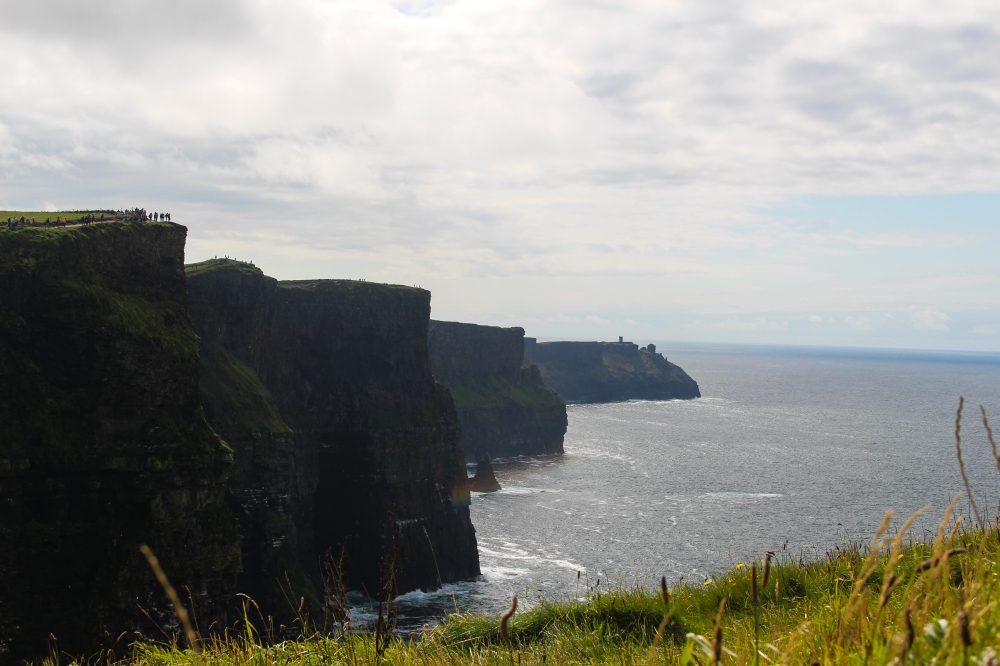 The Cliffs were quite busy when we arrived, but it was still easy to get around and see the stunning views they have to offer. 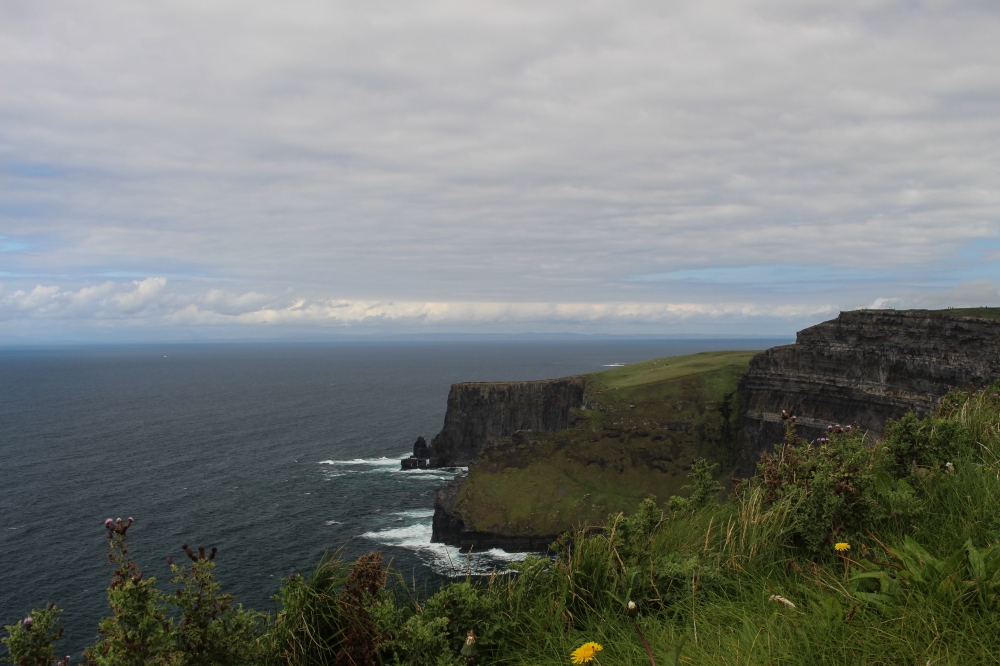 Walking along the edges of the Cliffs is not for the faint of heart. I tremble even typing this thinking of the daring souls who were brave enough to perch on the side to pose for a picture. Since there were no real guardrails, I stuck as close as possible to the inside of the winding trail that worked its way along the tops of the cliffs. I’m not sure if the twisting in my stomach was from the height or stunning views.

After the Cliffs of Moher, we drove the narrow roads along the coast as we made our way up to Galway. The roads of the Wild Atlantic Seaway wind and twist up the coast, leaving barely enough room for one car to get through–yet the roads were two-way. The terrain seemed to shift and change every few hundred feet, giving way to wide, flat areas dotted with rocks and mountains that rose above us. 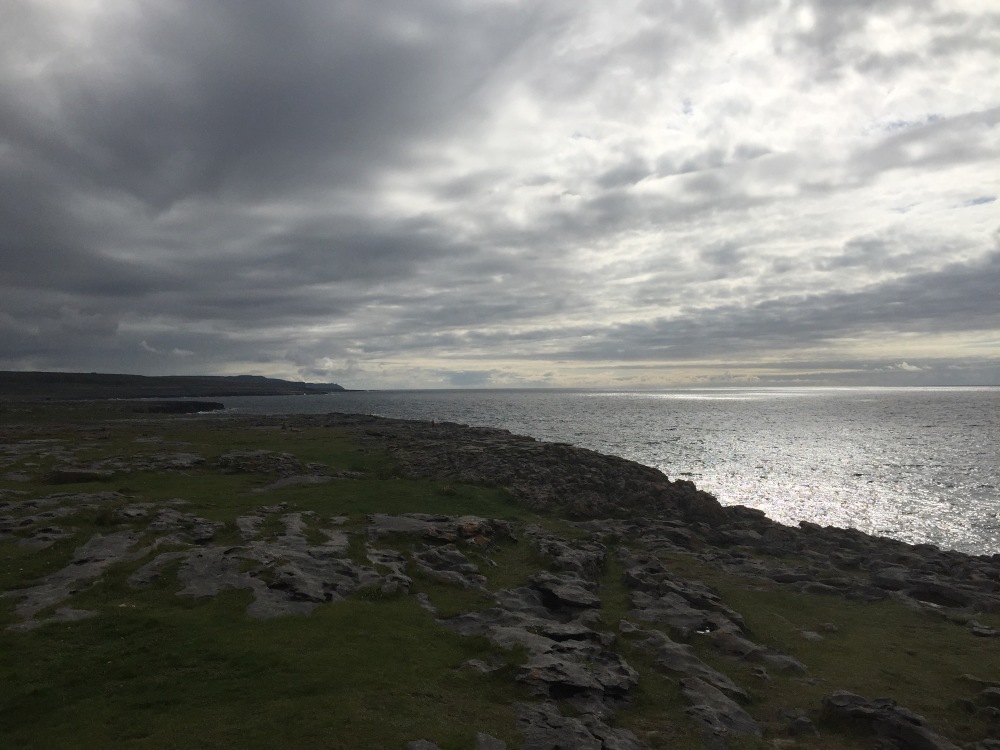 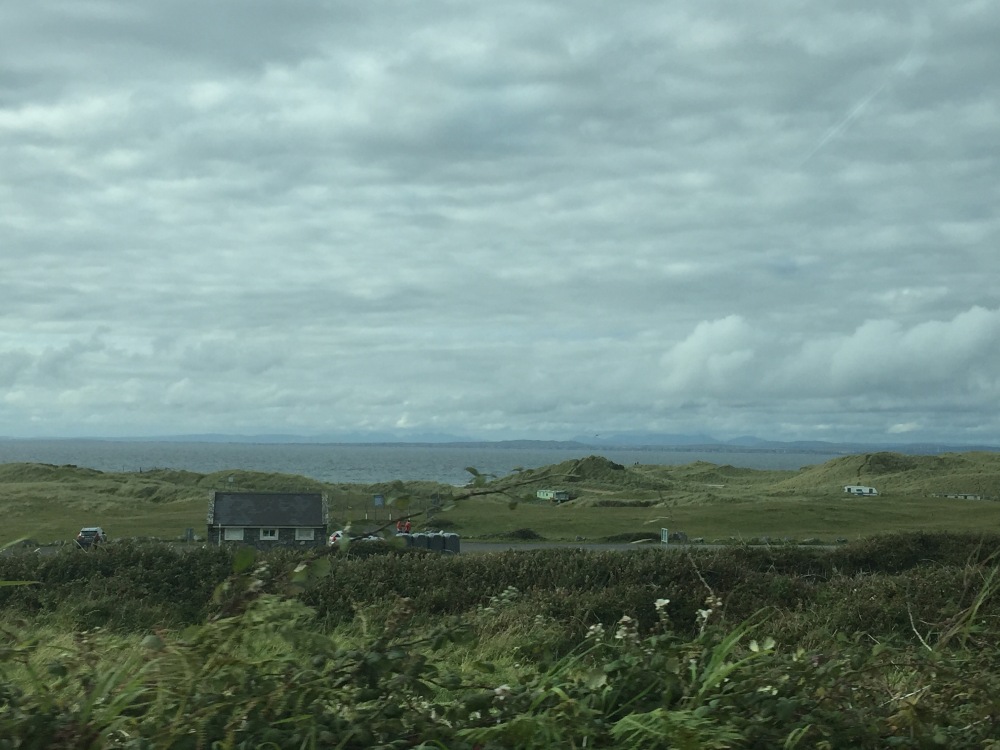 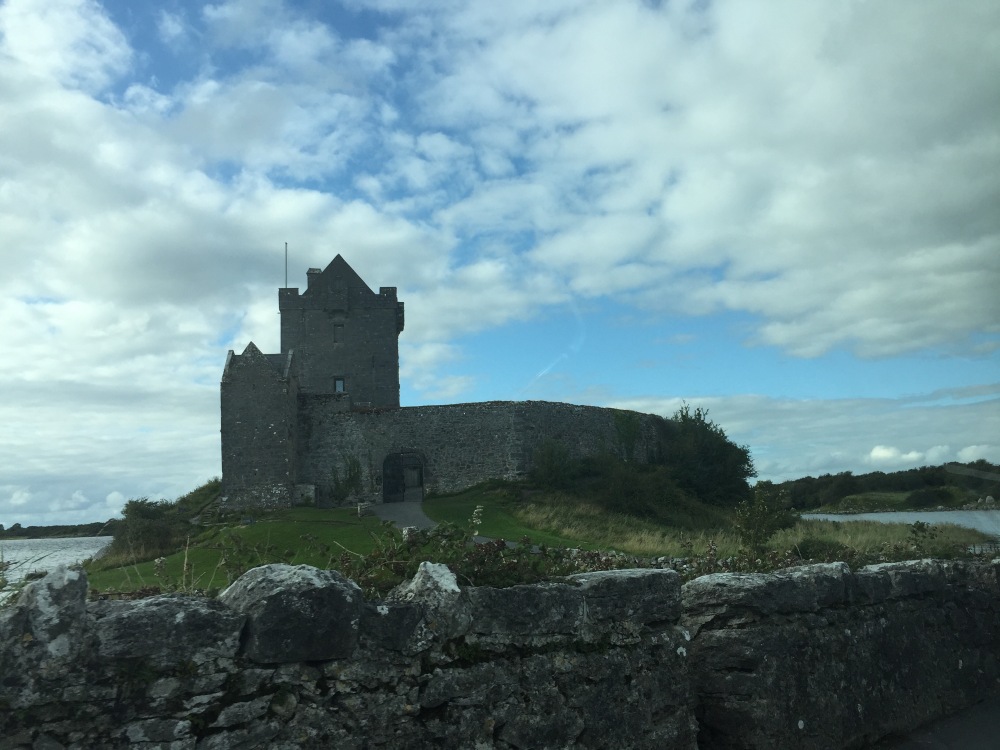 We stuck as close to a van driving in front of us as was safe and hoping he would claim right of way from any oncoming traffic. Fortunately we didn’t run into any other vehicles on that narrow stretch of drive.

Eventually we made our way to The Birches Bed & Breakfast just outside of Galway. It was neatly tucked into a cute little neighborhood on the edge of the village of Oranmore. We were welcomed graciously by our host, Marian and she immediately treated to fresh coffee and banana bread after showing us to our room.

The town of Galway is a cute, seafaring town situated on the coast. We took a cab the touristy area of Quay (pronounced “key”) Street, which was lined with jewelry shops selling Claddagh rings, pubs and restaurants. 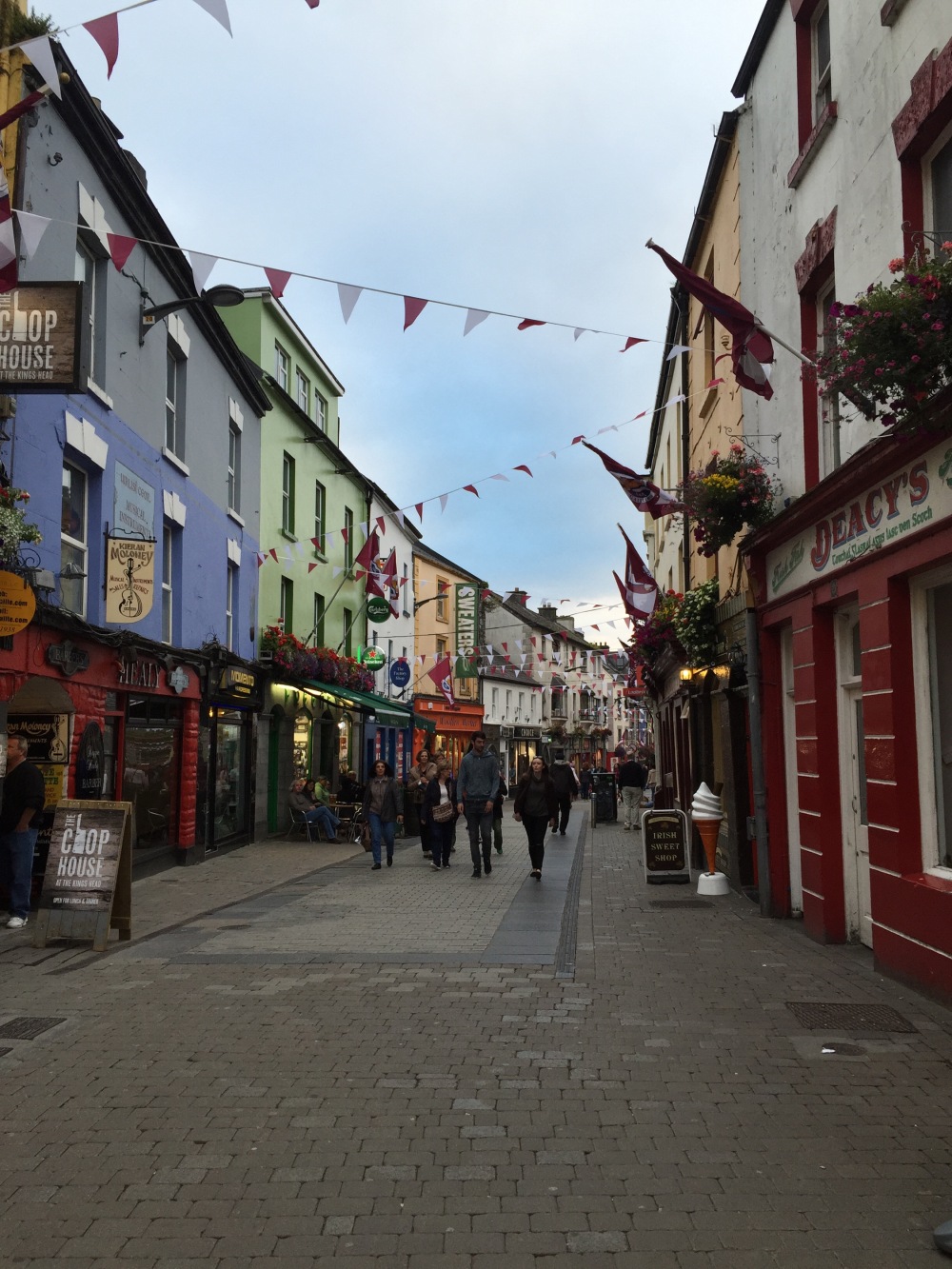 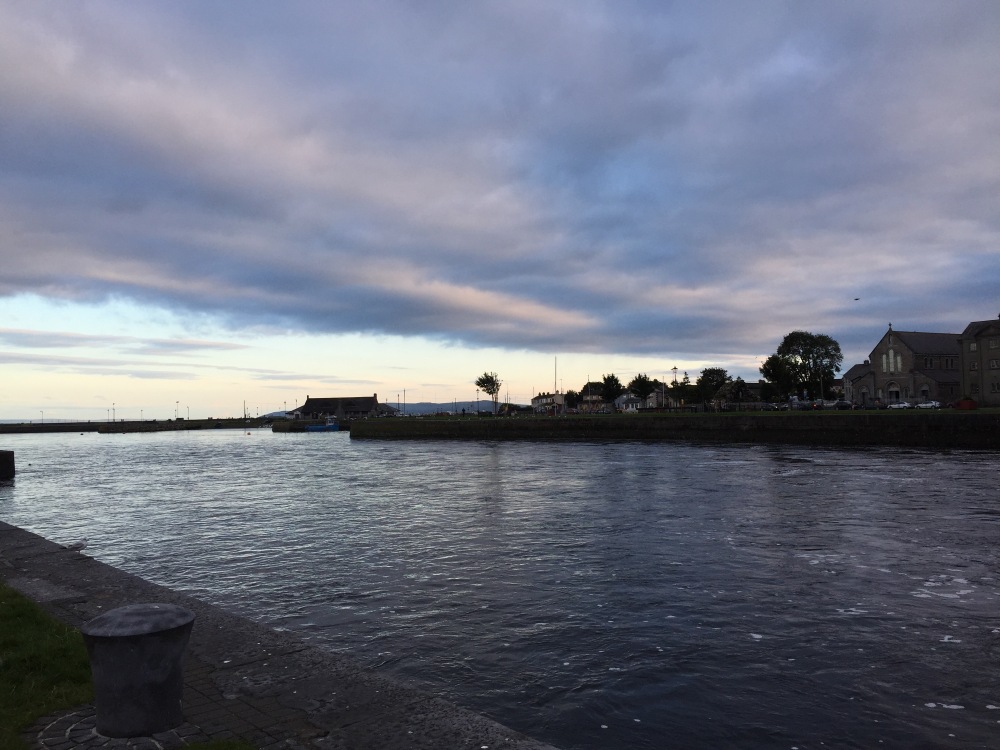 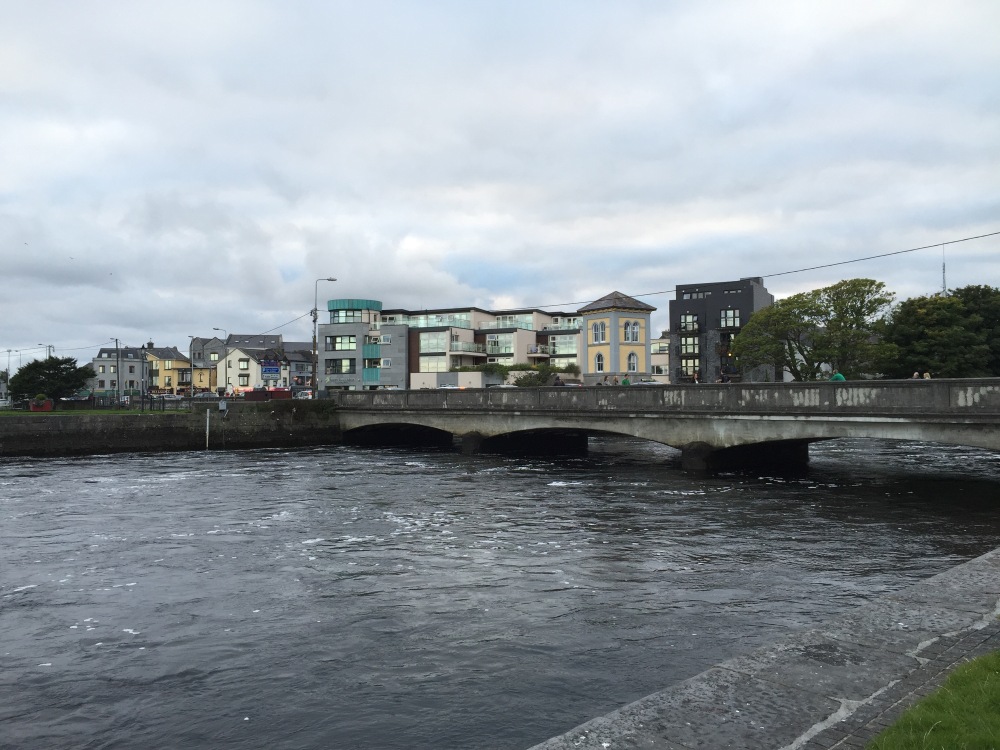 It was dinner time, after wandering the streets a bit we made our way to Mc Donagh’s. Being right on the coast, we had to get seafood. I got the fish and chips while Matt enjoyed a plate of shrimp, mussels and scallops. 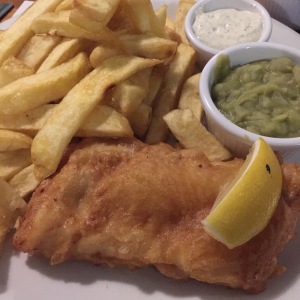 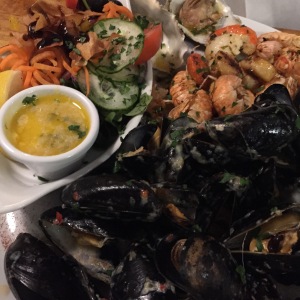 Fueled up, we headed out to check out a few of the local pubs and ended up at Taaffes Bar. It was packed and only got busier as the night went on. A band set up to play music and we squeezed our way back to the stage to listen. It was all fun and games until a drunken bachelorette party stumbled into us, spilling beer all over us. We decided to find a much quieter bar and hung out there until we decided it was time to hail a cab home.

After four long days in Ireland, I’m sure we slept hard that night–and we still had one to go! Stay tuned for our final adventures in Dublin, including attending the All-Ireland Gaelic Foodball semi-final match.