We’ve officially been living in Frankfurt for one week. It’s been a fairly easy transition coming from France, though I realize living in Toulouse for nine months made us pick up some new habits we definitely didn’t have in the U.S.–like shopping almost daily.

In Toulouse I’d grocery shop for one to two days’ worth of food at a time. This was partially because our refrigerator was so small and partially because the food there was extremely fresh and lacked the magical “staying power” of most foods in the U.S. In Atlanta, we typically did one big grocery shop per week and supplemented with maybe one or two small runs to the store during the week.

Now that we are in Germany, we have a bigger refrigerator and we shop at a grocery store. There are a couple of weekly farmers markets in Frankfurt, but we haven’t made it out to one of them yet. Still, I find myself running to the store on a daily basis to pick up dinner for that evening and lunch for the next day. I’m curious to see what other international habits we’ll have picked up on by the time we settle back down in a few years’ time.

Speaking of food, on Saturday night we were treated to a uniquely Frankfurt dinner by a wonderful couple from the area. I’d met Eva a few years prior at a company event in St. Louis and we stayed in touch on Facebook. She kindly reached out to me when she found out we moved to Frankfurt and offered to take Matt and me to dinner with her and her husband, Patrik.

We met them at Fichtekraenzi, a traditional Apfelwein (or cider) house in the Sachsenhausen area of Frankfurt. While much of Germany is known for its wine or beer, the Frankfurt area is known for its fermented apple juice. 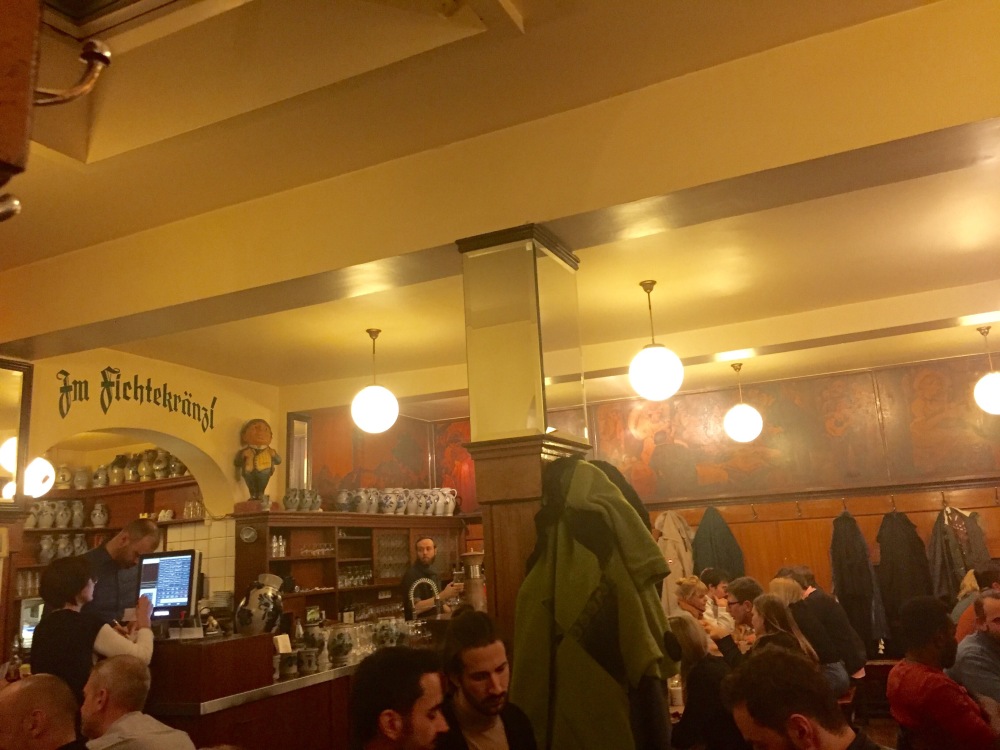 The restaurant was packed when we arrived, so we bellied up to the bar and Eva ordered a Bembel (a salt-glazed stoneware pitcher) of Apfelwein for her, Patrik and Matt. I settled for a glass of Apfelsaft (apple juice).

There are multiple ways to enjoy Apfelwein (which I was told can get a little tart). You can add a little sparkling water (Mineralwasser mit Kohlensäure) or even lemon soda or sprite. In the winter (or when you aren’t feeling well) you can heat it with a cinnamon stick, cloves and even a slice of lemon.

Before taking a sip, we made a proper German toast; we exclaimed Prost and clinked our glasses while (and this is very important) keeping eye contact with each person as we knocked glasses. Rumor has it, if you fail to keep eye contact you will have bad sex. None of us wanted to put that rumor to test.

Shortly after our toast, spots opened up at one of the long wooden tables. Unlike many American (or even French) restaurants, here you can often find yourself sharing a table with complete strangers. Those unaccustomed to this tradition might think it strange, but it actually made the restaurant feel even more warm and welcoming (and made it easier to see what the locals were ordering).

We ordered our food based on recommendations from Eva and Patrik. We started out sharing Handkäse mit Musik (or hand cheese with music). Though the name might sound a bit off-putting, don’t worry—it’s not made from hands. It simply refers to the traditional way of producing it: forming it with, well, one’s own hands.

I love Handkäse. I discovered it on our first trip to Frankfurt and immediately fell in love with its tangy flavor that perfectly complements the bread and onions (which make up the “mit musik” as in “Die Musik kommt später” or “the music [flatulence] comes later”) with which it’s typically served. It’s a small, yellow cheese with a pungent aroma that is surprisingly low in fat but high in protein (even the German health magazine I picked up recommended it as a good food for helping lose weight). Caraway seeds are often served as an optional topping. If you don’t want to look like a tourist while eating it, always cut and spread the cheese on your bread with a knife—not a fork.

We also shared a dish of Sachsenhäuser Schneegestöber (or creamed cheese). This, too, we spread on bread and the herbs mixed in gave it almost a sour cream and onion flavor. Absolutely delightful!

For the main course, I opted to go with a local favorite: Frankfurter Schnitzel mit grüner Sauce und Bratkartoffeln (breaded, fried meat with green sauce and fried potatoes). The schnitzel was lightly breaded and delightfully crunchy on the outside while tender on the inside. The potatoes were equally delicious—lightly fried and seasoned. The green sauce. Oh the green sauce! This condiment, which reminds me of a creamy pesto, is unique to Frankfurt (you can read more about it here). If you come to Frankfurt you must, must, must try the green sauce.

Matt ordered another local favorite: Leiterchen gegrillt mit Sauerkraut und Brot (grilled spare ribs with sauerkraut and bread). It came perfectly cooked and seasoned; so tender it took only a few chews to tear through a bite. 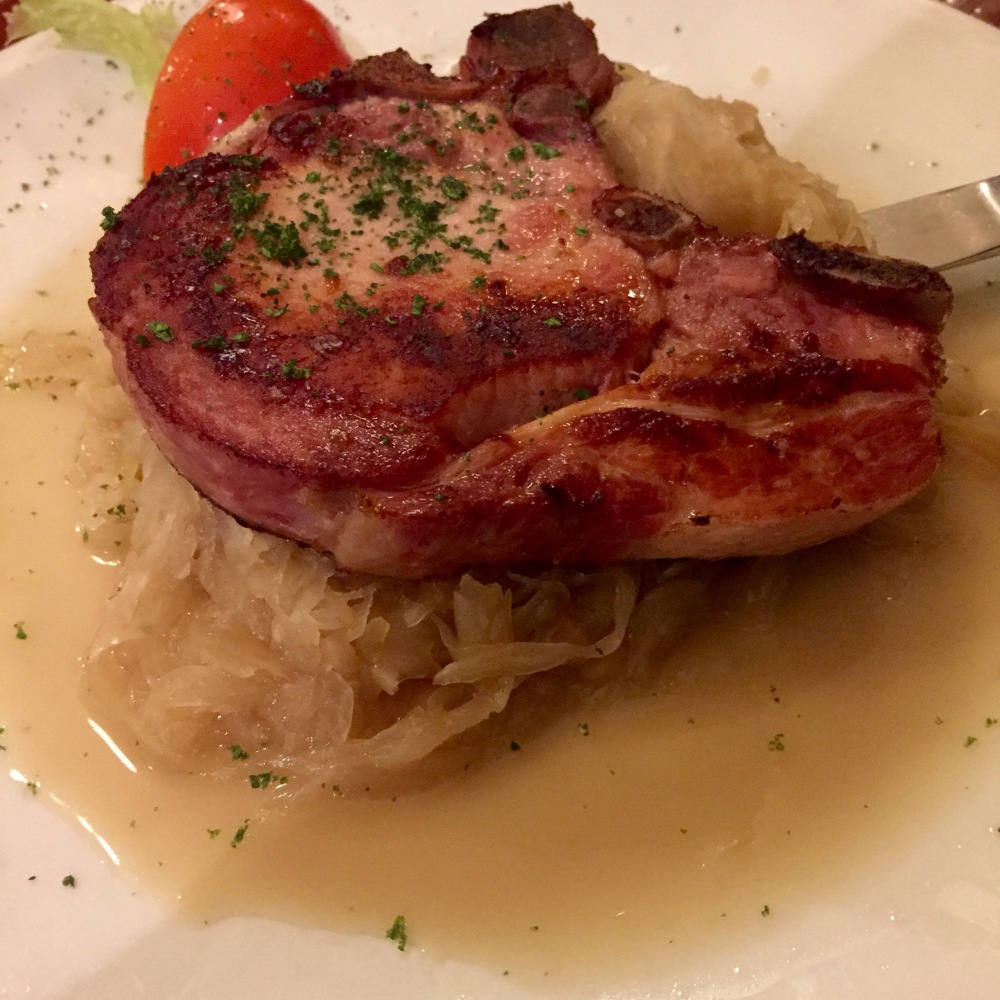 After dinner, Matt and Eva enjoyed a Calvados mit Mispel (apple brandy with a fruit called medlar which is kind of a cross between an apple and a peach). As in France, there was no pressure to get us out the door, so we were able to sit and talk well after our meal was finished.

It was wonderful to spend our first Saturday night with a couple local to the area. They gave us some great ideas on things to do while we’re here in Frankfurt, so hopefully we can fit in some of those adventures in the next few weeks and then I can share the stories with you.