Tomorrow we will be heading back to the U.S. for the first time in four months. We are traveling to Florida for one of my cousins’ weddings and are looking forward to spending time with our family and friends.

It’ll be strange to be back in our home country; speaking in English, paying in dollars and getting my first PSL (Pumpkin Spice Latte for you non-Starbucks drinkers) of the fall. We’ve joked about pretending to not understand English anymore or attempting to pay for drinks in Euros when we’re around people we know. As silly as we are about it, I’m wondering if we will accidentally say something in French or do something quintessentially European (like, gasp, walk instead of drive). Only time will tell.

Last week I think we caught a little bug going around Matt’s office, so I fell behind in my writing thanks to my inability to move from the couch. So I’ll make up for it now with a post about our last day in Ireland.

We spent our second-to-last day in Galway (you can read about that adventure here) and woke early on Sunday morning to go to mass (our first English mass in months!) and get on the road to Dublin. It’s funny, mass in Ireland seems to be as short as it is long in France. We were in and out in 45 minutes—and the priest still got in some good one liners! When we went the following Sunday in France, we were there for an hour and a half. What a difference a country can make!

Anyway, after mass we got on the road and made our way to Dublin—we had a Gaelic football match to attend. No, not just any match—the All-Ireland Senior Semi-Final between Dublin and Mayo. Yours truly scored awesome seats at a game that could be compared to the American football playoffs leading up to the Super Bowl.

If you’ve never heard of Gaelic Football, it’s kind of a cross between soccer, basketball, volleyball and rugby. Here’s a great video explaining the game.

It’s quite an exciting sport and one that Matt and I used to play in Atlanta. So, getting to see a match at Croke Park in Dublin was a perfect way to end our visit.

We passed a number of cars streaming Mayo flags as we headed into Dublin. Once we got to the city, traffic slowly built and Dublin flags began to mix with those for Mayo.

We were staying across from the park at The Croke Park Hotel and had left Galway early enough to get to the hotel at least two hours before the game. That, it turns out, was still too late to turn on the street we were looking for and park at the hotel. The roads as we neared the stadium were mobbed with fans drinking and cheering and getting pumped up for the game. 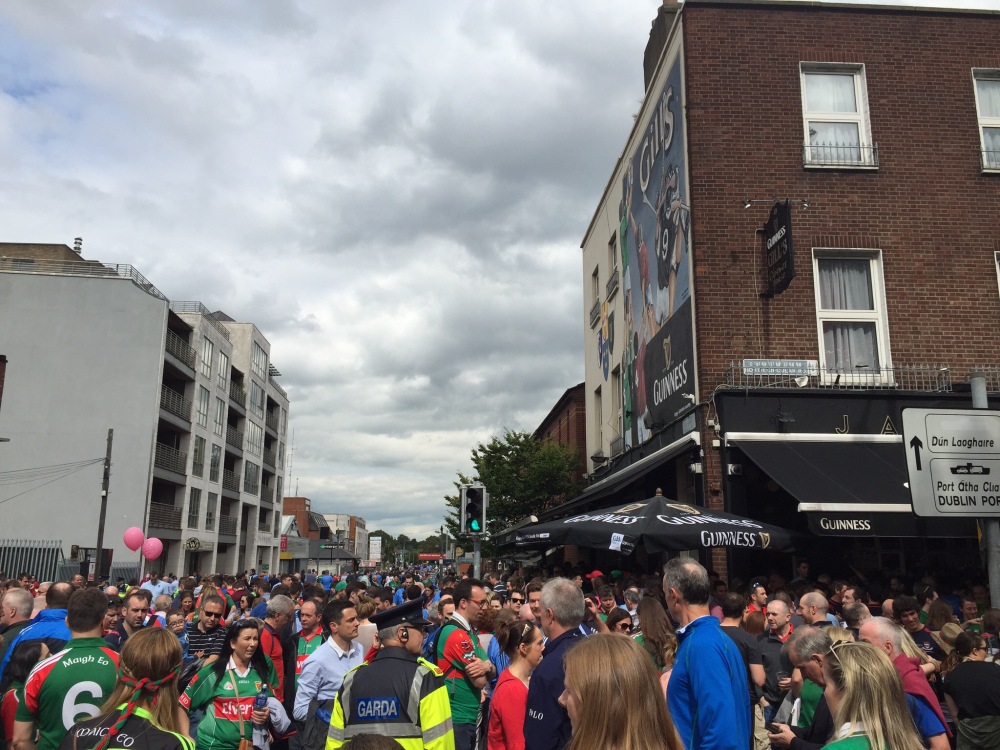 We parked a couple of blocks up and dragged our suitcases to the hotel, which was also mobbed. We had to get security to let us through as they were limiting the number of people who could pre-game in the hotel lobby and bar.

The service at The Croke Park Hotel is stellar. We were welcomed with hot towels (a welcome refreshment after a long drive) and were ushered up to our large, spotless room. A bit later in the afternoon they even sent up champagne for Matt’s birthday! Unfortunately we were a few beers in and at the end of our drinking tolerance for the trip, so didn’t end up opening the bottles, but we really appreciated the thought!

We dropped off our luggage and headed out to find scarves for the game. Since we were in Dublin and had no allegiance to either team, we decided to root for the home team! 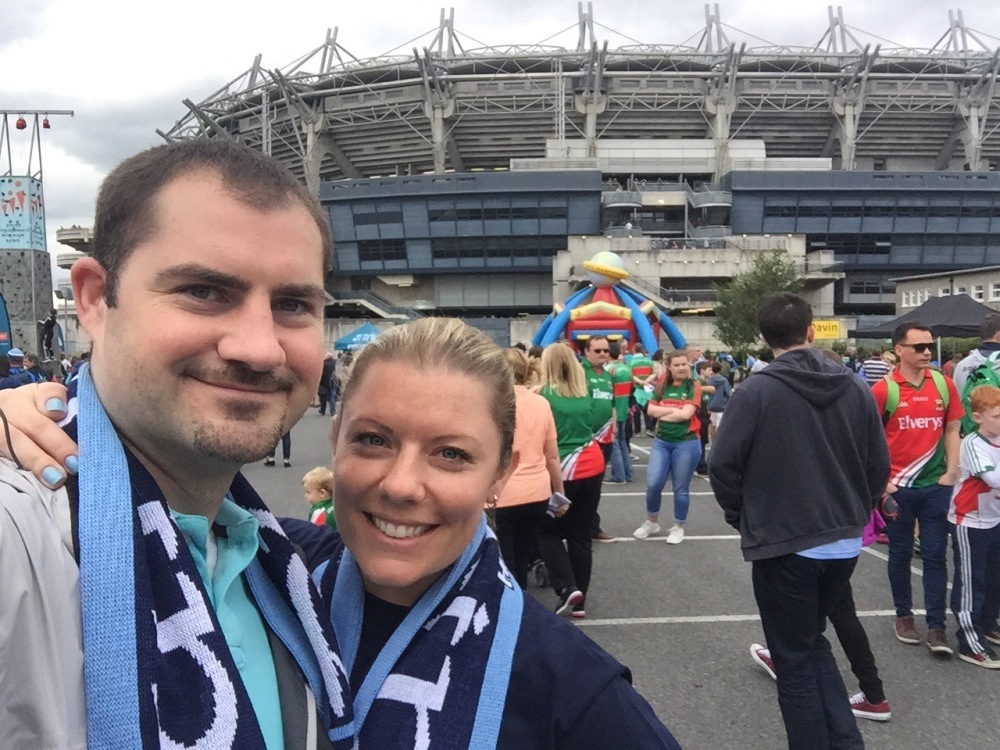 The stadium was sold out and, so, completely packed with fans for both teams. Our seats were just a few rows back from the field near, giving us a great view of the action. 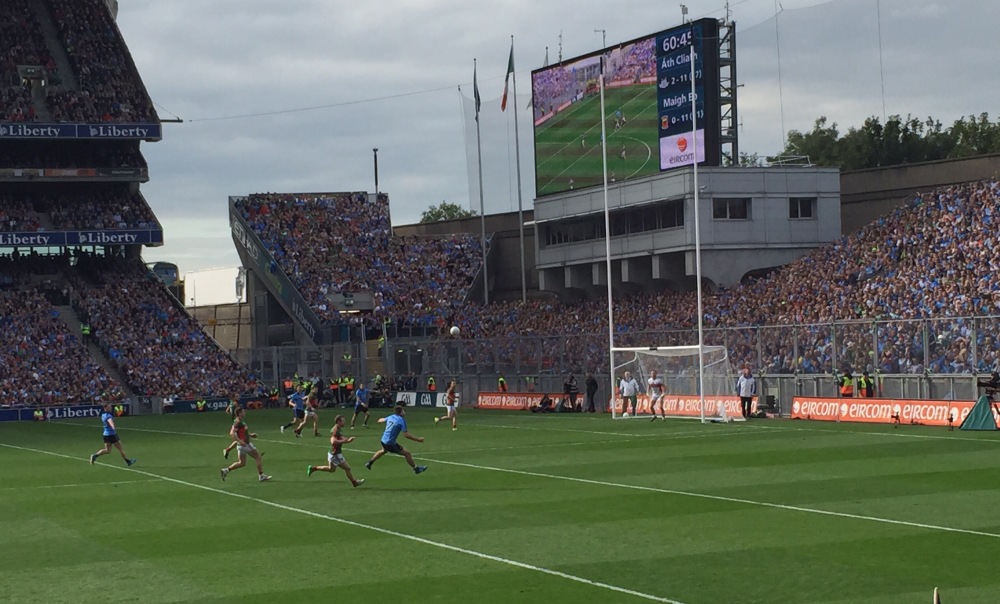 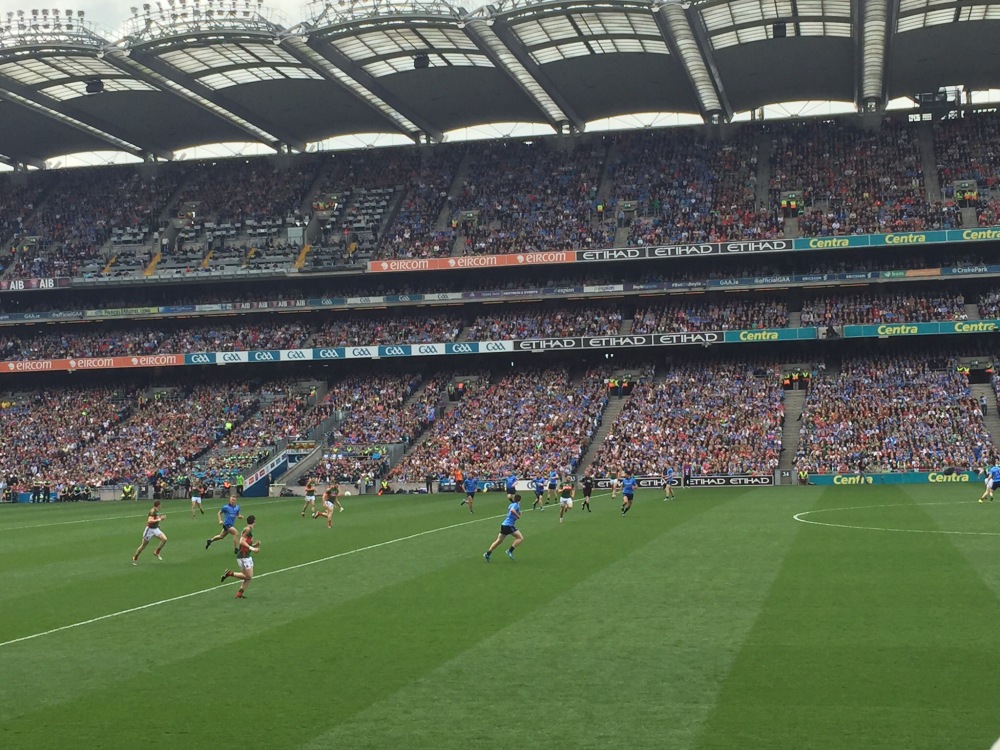 The energy of the stadium swept us up and for the next 70 minutes we enjoyed an incredibly well-fought match that ended…in a tie. This meant both teams were going to have to meet up again in a couple of weeks and replay to see who would be in the final. Unfortunately we weren’t able to go back to see that match (spoiler alert: Dublin won).

After the game, we made our way back to our room in the still mobbed hotel. My friend, Fio, who I met in Atlanta but moved back to Ireland a few years ago met up with us and the three of us went to dinner in Dun Laoghaire. The food was tasty, the company glorious and, after filling our bellies, we went for a beautiful, if chilly stroll down by the waterfront. 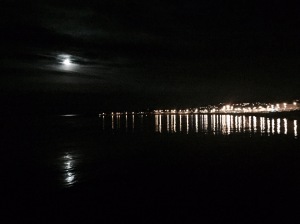 We definitely did not get to see everything we wanted to in just four and a half days in Ireland, so plan to go back again someday. But, between the castles, food, beer and sport, we had quite the craic (the fun kind—not the illegal kind, of course).