Today marks seven days of living in limbo from when we were approached about making a last-minute move to Doha from France. On Tuesday, we thought we had the greenlight to go. The very next day, however, we learned of a health insurance challenge the company hadn’t anticipated, so now we’re back to wondering where our baby will be born. Let’s just say living in limbo isn’t doing anything to improve my pregnancy insomnia and indigestion—but, hey, I guess it’s getting my body ready for the sleepless nights with a newborn.

To get through this, I thought I’d flash back to an easier time. A time when I was still in the glow of my second trimester and had the comfort of a plan for my third. Let’s take a trip down memory lane to Easter weekend.

The Friday before Easter, we flew round-trip between Frankfurt and Toulouse for my major, second trimester scan with our doctor in France. I can imagine the look on your face at the thought of making a round-trip flight between countries just for a doctor’s appointment. It’s probably pretty much the look our doctor had on his face when we told him we flew in for the day just to see him. That, my friends, is just a normal day for us.

Sidebar: A lot of people, including our doctor, asked us why we didn’t just find an OB/GYN in Germany to do the scan. Well, we had less than a week notice to move to Germany and, as I’m sure many of my female readers can attest, getting an appointment with a new OB/GYN—especially a good one—can take weeks. We were only slated to spend seven weeks in Germany and two of those weeks we ended up back in the U.S., so it really wasn’t feasible to find a doctor and book that important scan. So, we probably set some kind of record for distance traveled for a routine ultrasound.

Fortunately, the scan went very well and our sweet, little baby was even measuring a bit large for 26 weeks of pregnancy. Our doctor proceeded to predict that I might be delivering a large baby—especially since her daddy and his siblings were all nearly 10 pounds when they were born (compared to my just over 7 pounds at birth). He laughed when my eyes grew as big as saucers, telling me “it’s too late to change husbands now.” Well played, doctor, well played.

Energized by a positive report on my pregnancy and our baby, we decided to take a drive up to Cologne (a.k.a Köln), Germany on Saturday. Cologne is just over two hours from Frankfurt, making it an easy day trip.

Wikipedia describes Cologne as the largest city in the German federal state of North Rhine-Westphalia and the fourth-largest city in Germany. It’s also where the term “Eau de Cologne,” or “Water of Cologne,” originated (in German Kölnisch Wasser). Many tourist shops still sell the “original” cologne, which was first mixed in 1709 by an Italian named Giovanni (Johann) Maria Farina (the history is really quite fascinating). For you beer fans, Kölsch beer is another great gift from this city on the Rhine River. With great smells and good drinks, maybe Cologne is really the happiest place on earth.

We went specifically to check out the Cologne Cathedral, which one of my uncles, who’d visited it years before while stationed in Germany with the U.S. military, promised was a sight to see. He wasn’t wrong. This Roman Catholic cathedral impressively towers above much of the Cologne skyline. It is the largest Gothic church in Northern Europe and two huge spires give it bragging rights to the claim of largest façade of any church in the world. 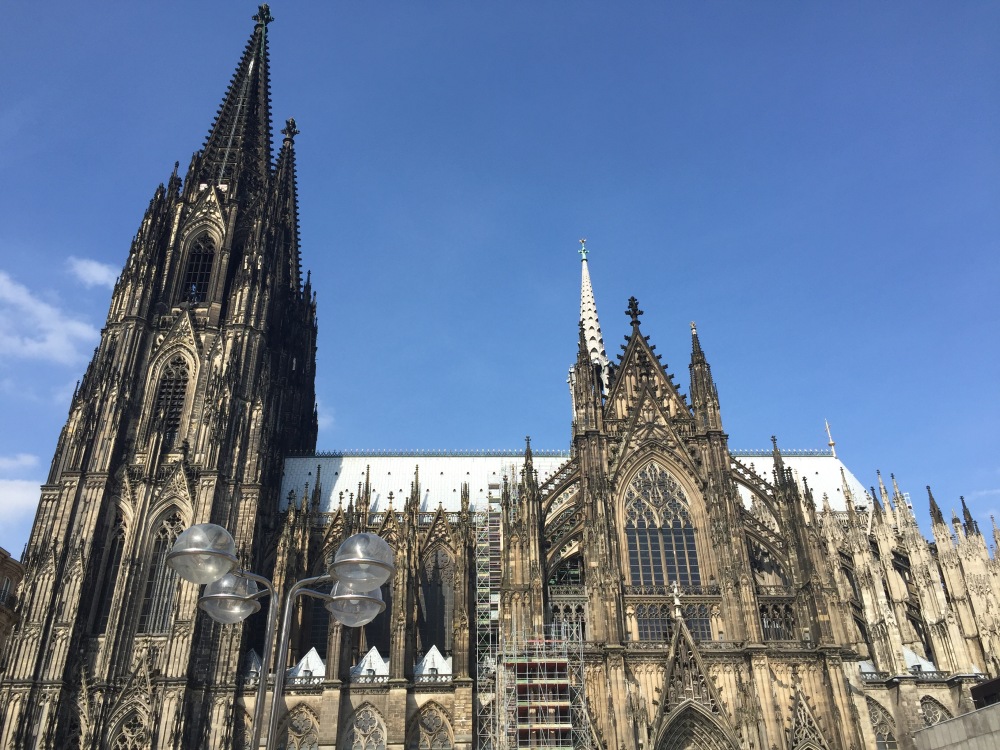 Construction on the Cathedral first began in 1248, but it wasn’t completed until 1880—632 years after the first brick had been laid. World War II wasn’t kind to the Cathedral—it suffered 14 hits by aerial bombs, but managed to stay standing though the rest of the city was pretty much flattened. It has since been repaired, though maintenance is ongoing.

The detail on the exterior is intricate and exquisite and the interior is equally beautiful. Large, stained glass windows cast rainbows on beautiful old relics and the simplicity of the alter compliments, but doesn’t compete against, the breathtaking vaulted ceilings. The Cathedral attracts about 20,000 people—a day. So be prepared for big crowds if you go. The day we visited there was a lively protest against animal cruelty going on outside the Cathedral, in addition to all the normal tourist traffic. 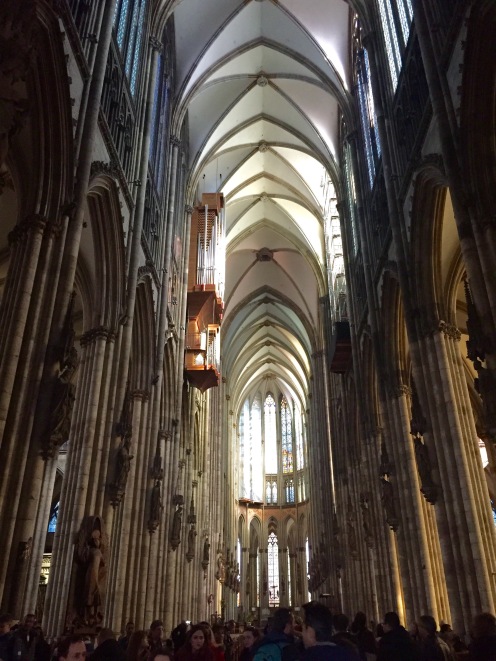 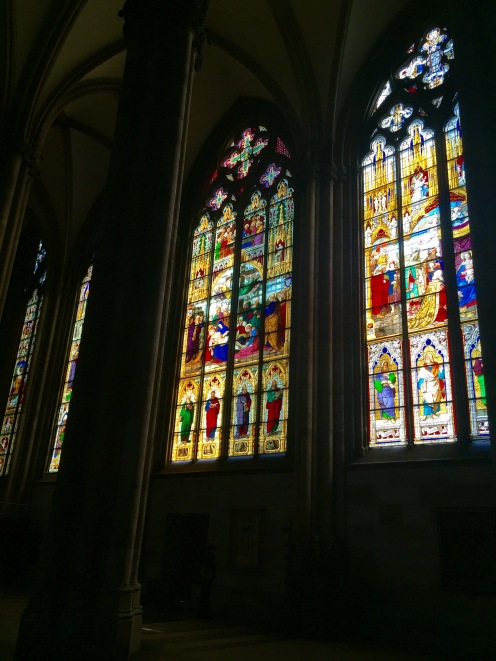 After the Cathedral, we made our way down to the riverfront. We strolled through Old Town, wandering down part of the major shopping streets in the city (Shildergasse and Hohe Straße). Nearing the river, we admired some of the buildings that have been rebuilt in a very traditional, German style. 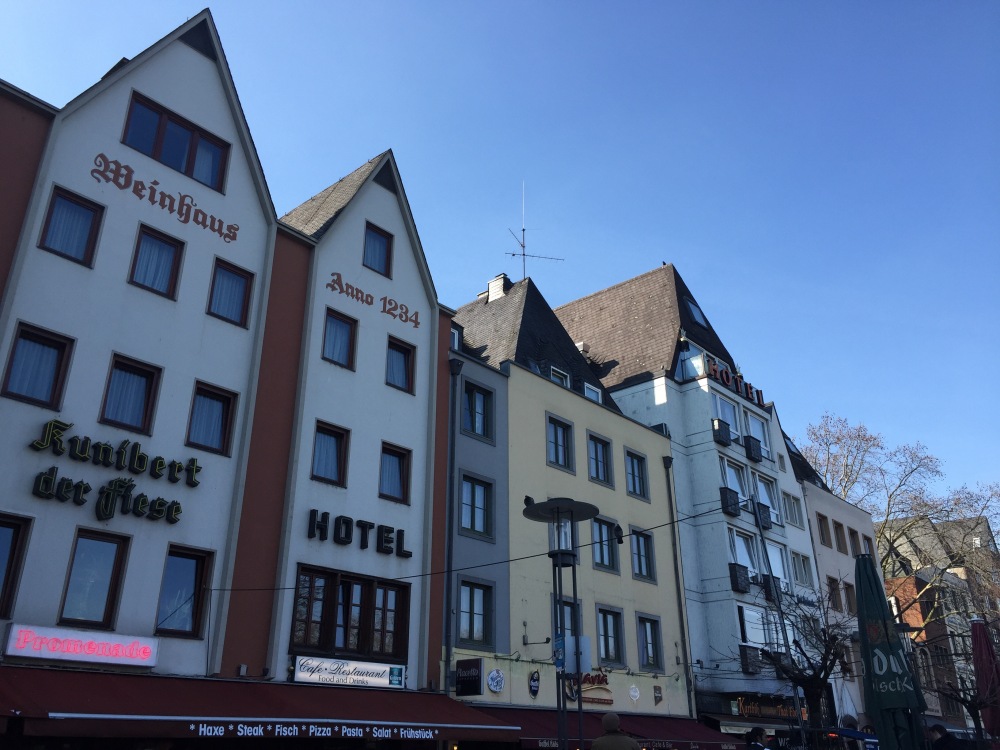 The Rhine riverfront is a wonderful place to stroll on a nice day. Fortunately, the day we visited was beautiful, so tourists and locals alike flocked down to the running/walking path to enjoy the sun and warm, spring weather. Many were camped out at benches along the path, picnicking or just enjoying the company of family and friends.

Admittedly, one of my ultimate goals of convincing Matt to walk along the river was to go to the Chocolate Museum. We toured the Hachez Chocolate Museum in Hamburg, which was quite fun, but this museum, associated with Lindt & Sprüngli, was even bigger! 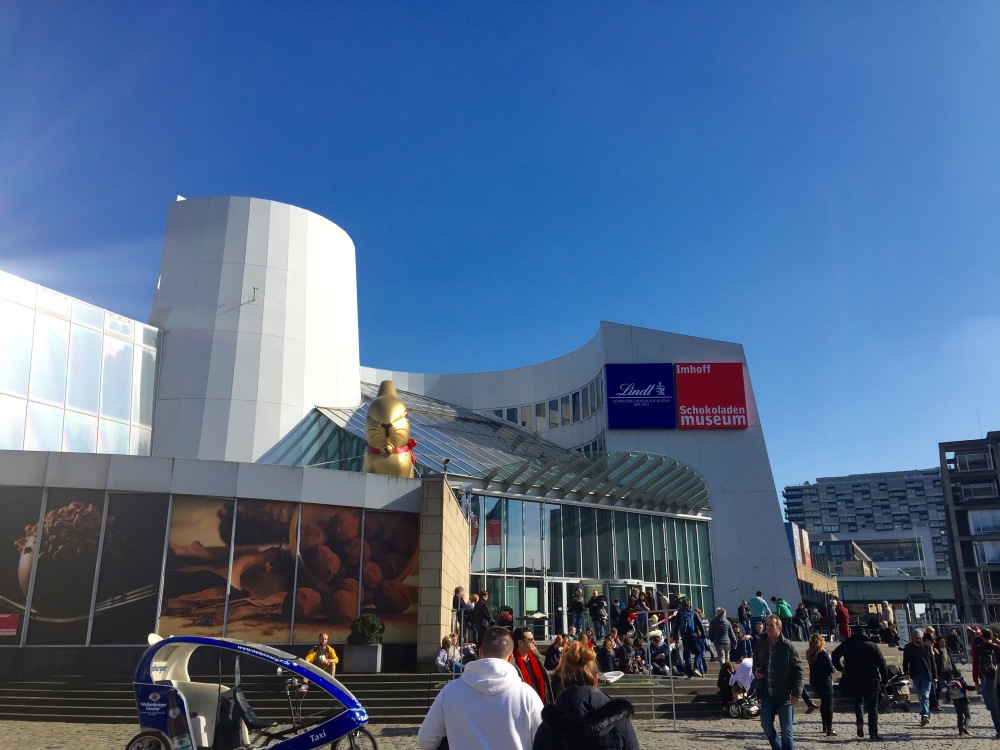 Plus, it had a chocolate café and, well at this point it had been several hours since lunch, so mama needed a snack! We ended up skipping the museum and going straight for the cake, but the museum was quite packed. I’d assume it’s one of the most popular attractions in the city—after the Cathedral.

After our sweet break, enjoyed in a dining room overlooking the river, it was time to head back to the car and return to Frankfurt. We planned to go to St. Leonhard’s English Easter Vigil services that evening. Before we left, however, Matt took me to one of the bakeries near the Cathedral to get a mouthwatering, fresh pretzel. We were still stuffed from our cakes, so the pretzels (and an apple) ended up being dinner when we got home.

Our weekend wrapped up perfectly with a visit from our dear friend, Maxi, who is a flight attendant and fortunately had a trip through Frankfurt on Easter Sunday. We enjoyed some delicious German food and even better conversation.

Remembering this fun weekend not so long ago brought a smile to my face as I wrote this post. Living in limbo aside, we really are lucky to be seeing so much of the world. I can’t wait to start sharing these experiences with our daughter!