It’s hard to believe December is well underway and that we’ve entered our 6th month living in France. December is shaping up to be a busy and fun month!

In one week, we leave for Austria and Germany for a few days to celebrate our first wedding anniversary. Two words: Christmas markets! Hard to believe next week marks one year since we got married! What a wild, but fun ride it’s been. I couldn’t have asked for a better partner with which to share such a crazy year.

Christmas Eve we head up to Paris. Our friend, Ray, will meet us in the city on Christmas Day and Matt’s mom joins us the day after Christmas for a week and a half. In between then, we’ll try to slow down, breath and enjoy what is going to be a very fun and special December.

Speaking of fun and special, I haven’t finished telling stories about our exploration of northwestern France. If you’ll recall, we started this little adventure with a visit to Mont-Saint-Michel. After a fun day exploring this French landmark, we headed to Bayeux. As we drove, the rain started to come down heavy and it decided to continue all through the next day.

We booked a full-day tour with Bayeux Shuttle. It included a guide and transportation to many of the major WWII sites in Normandy, including Utah and Omaha Beaches and the Omaha Beach American Cemetery. Lunch was also provided.

We had to meet our tour at 8:30, which meant an early start. Unfortunately the tour didn’t have designated parking, so we had to park at the train station and walk about a quarter mile to the meeting point—in the dark and pouring rain. Even our rain coats and umbrella weren’t doing much to keep us dry and, when a car flew by us and splashed water all over us from a puddle on the road (just like you see in the movies), well we pretty much gave up on trying to stay dry.

Eventually we made it to the van and discovered there was only one other couple going on the tour with us that day. Our guide, Vincent, was quite a character. His cheerful attitude, great stories and jokes certainly brightened up a cold and rainy day. We discovered his father was born near Toulouse—in 1913! He was born when his dad was over 60-years-old. Not only was he knowledgeable about the facts of the war, he had some incredible stories to tell from family members who lived through the war in France.

Our first stop on the tour was a German cemetery. I never realized how many soldiers, on both sides of the battle, were buried in the country where they fought. Admittedly, my first reaction to visiting the German cemetery was one of confusion. Weren’t these guys the enemy? Vincent quickly put it in perspective. Yes, there were a few Nazis buried in the cemetery, but most were guys who were just called up (or even forced) to fight for their country.

The headstones were simple and the crosses staged meticulously throughout the cemetery were stark, yet visually powerful. A monument at the center of the cemetery depicted a mother and father mourning their fallen soldier. 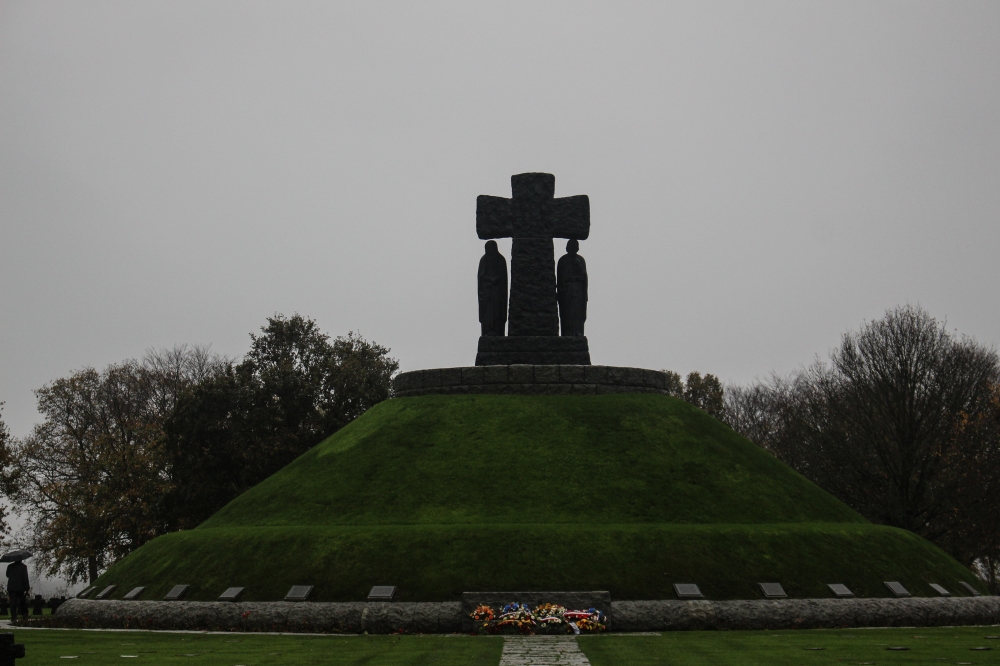 Our next stop was the town of Sainte Mere-Eglise, which was made famous by the film, “The Longest Day.” In the early morning on D-Day, paratroopers from the 82nd Airborne, 505th Parachute Infantry Regiment were mistakenly dropped directly on the town square—a couple (including John Steel) were snagged by the steeples of the church.

Today, a model of the famous paratrooper hangs from the church and some of the buildings and fences near there still have holes where bullets struck. 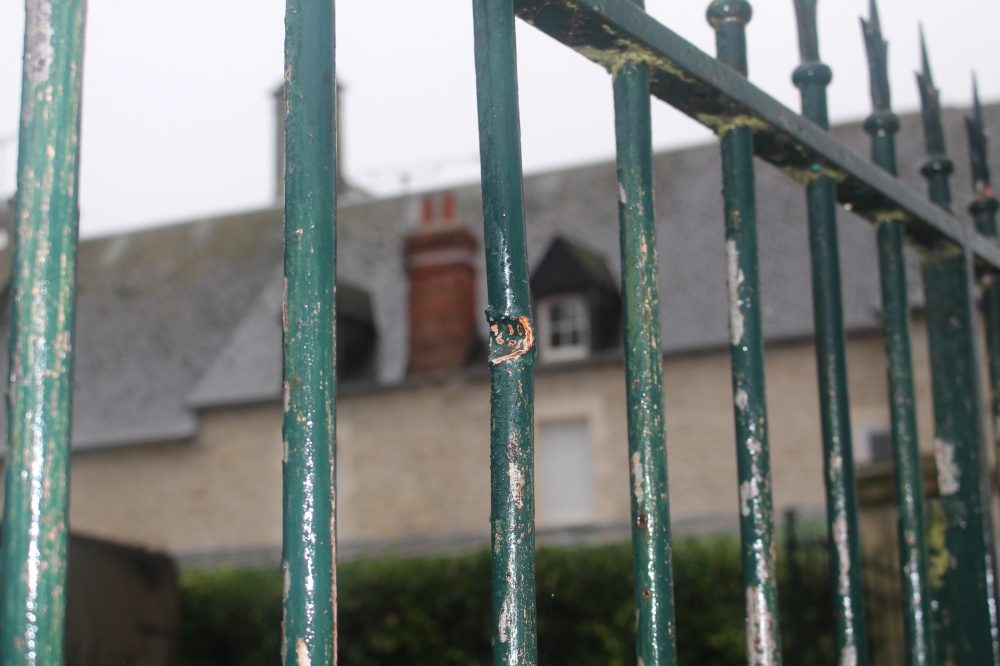 After Vincent finished his story about the town, we took a quick peak inside the church before scurrying back to the van to escape the cold and rain.

Our tour continued, stopping next at Utah Beach where the 4th Infantry of the U.S. VII Corps battled on June 6, 1944. Here there were several monuments and a replica of the Higgins Boats that took the soldiers to the beaches, as well as a German bunker.

Interestingly, there were some riders and their horses practicing harness racing in the cold, wind and rain on the beach that morning. It was difficult to get a good picture while juggling an umbrella and camera, but pretty cool to see. 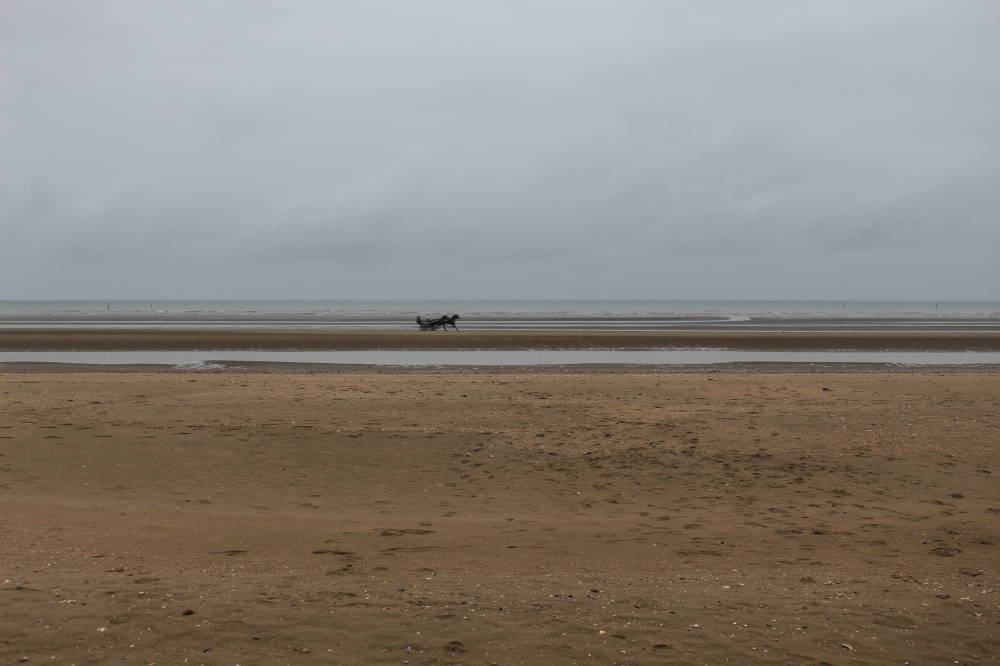 After eating a quick lunch at an old stone farmhouse that was occupied by the Germans during the war (now owned by the tour company owner), we headed towards Pointe du Hoc. Along the way, we passed a few notable spots, including the Richard Winters Leadership Monument (think HBO’s Band of Brothers) and Sainte Marie du Mont.

Pointe du Hoc was one of the most interesting stops that day—unfortunately it was also one of the windiest and coldest. This German strongpoint was considered impregnable, especially with the sheer cliff leading up to heavily fortified German bunkers. 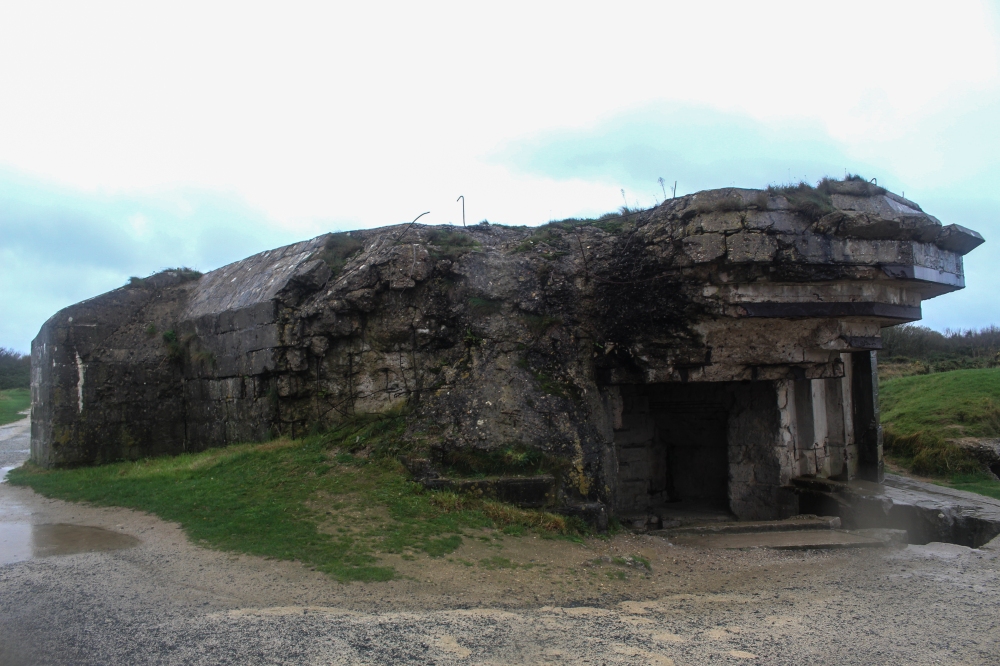 Today, you can still see the craters in the earth where the Allies dropped bombs. You can also go inside some of the bunkers that still stand. It was impressive to think of the soldiers who not only had to scale the steep cliff, but overcome strong German pressure to take the Pointe.

We took a peek inside one of the bunkers and stared in awe at the view, before heading towards the warmth of the visitor’s center where we watched a movie about the location. 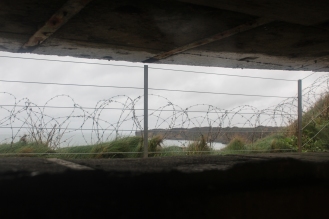 Omaha Beach was up next. It was quite different from what I was expecting. I thought it would be more like Utah Beach—wide open expanses with few buildings. Instead, the beach is kind of a resort town with houses tucked neatly near the cliffs rising above them. The tide was coming in, shrinking the beach and forcing us to escape to higher ground about halfway through Vincent’s story about what happened there on D-Day. 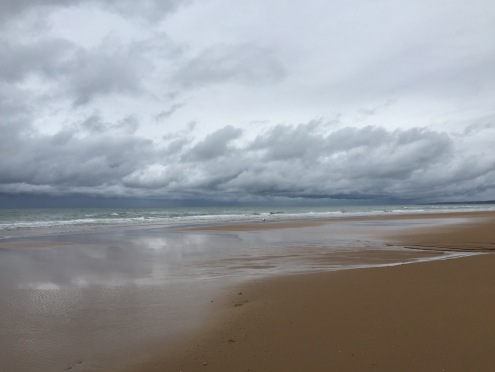 We learned that many of those homes were torn down by the Germans during the war. After the war, many were rebuilt (some in the exact style they were pre-war), but the government restricted new building to protect the beach from becoming overly commercialized.

The rain was coming down pretty hard at this point, so we opted to head to the Omaha Beach American Cemetery rather than exploring the beach a little more.

The Cemetery was quite breathtaking. Perfectly placed rows of crosses and Stars of David marked the final resting place of the 9387 soldiers who gave their lives between WWI and WWII. 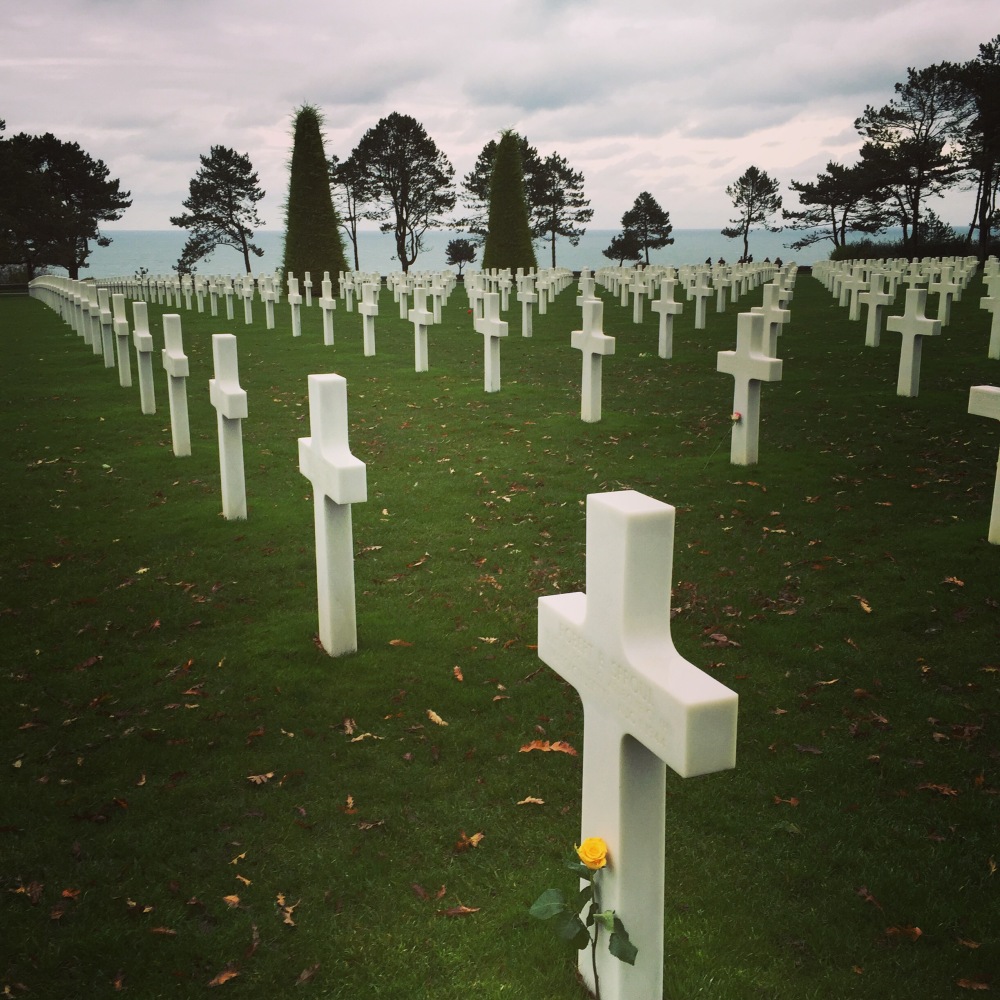 A beautiful monument at the beginning of the Cemetery paid further tribute to those who made the ultimate sacrifice. It was a fitting way to end the day.

We piled back in the van after about an hour at the Cemetery and made our way back to Bayeux. It had been a long day, but I think we both learned a lot. One of the most incredible benefits of traveling the world is getting to see places that before you only read about in books. It truly brings history and geography to life.

Our next leg of the journey was the Loire Valley, allowing us to step back into the days of kings and queens (and letting me break out my imaginary swishy dress). That, however, is a story for another day.