*The image above is just a small portion of the Mexican salsas section at the grocery store.

Grocery shopping in different countries is hands down one of my favorite things to do. I find it so telling about a country and its people to see what products are popular. I also love discovering products I’ve never seen before in the stores I’ve shopped at in the U.S. or other countries. So I’d be remiss if I didn’t share my favorite grocery store finds here in Mexico.

Chicozapote (a.k.a Sapodilla)
This little, round fruit may have a bland outer appearance, but its flesh packs such a sweet punch, you’ll almost feel guilty eating it. This fruit comes from an evergreen tree native to southern Mexico, Central America and the Caribbean. It softens up like a juicy peach when ripe, but the texture of the flesh is more reminiscent of a pear. The taste is like sugared pear or caramel. It literally melts in the mouth! I really hope we have access to these wherever we eventually settle down, because it’s a rich dessert in itself without a ton of calories.

Mamey (pronounced ma-may—as in “Ma, may I have another!”)
On first glance, mamey looks like a slightly larger and rougher-skinned version of the chicozapote (or even a mango covered in sandpaper). It, too, is native to Mexico, as well as other parts of Central America. The flesh is a dark salmon color and has a texture somewhere between a ripe cantaloupe and baked sweet potato. It doesn’t taste like melon, however; more like pumpkin and sweet potato casserole. It’s great to eat alone or even blended up in a smoothie or milkshake (the combination of mamey and chocolate chips is pretty amazing).

Jamaica Flowers (Dried hibiscus flowers)
I’m sure you can find these in the states, but they aren’t something I’ve ever looked for (or, I guess, noticed if they were in fact at the stores where I shopped). We’ve been working our way through our Eat Mexico cookbook and one of the recipes in it is for a Jamaica flower iced tea. When brewed, the flowers give off a tart, fruity taste similar to a cranberry. Mix the tea with a little honey or agave nectar and lime and you have an amazingly refreshing drink.

Crema
Crema is like the Mexican version of crème fraiche. It’s runnier and milder than an American sour cream and can be put in or on everything from tacos and soups to cakes and fresh fruit. It’s perfect for balancing out the heat of a spicy meal or kicking up the creaminess of a roasted poblano soup.

Poblano Peppers
Speaking of poblano soup, poblano peppers have become a new obsession of Matt’s and mine. They can be a bit spicy and have much more flavor than a simple green pepper. Traditionally they are charred and the skins rubbed off (giving them a hint of smokiness), but we really like the skin and often just slice them up and cook them with onions for our version of rajas.

Queso Panela
This soft, crumbly cheese reminds me of halloumi. It’s a mild and salty cow’s milk cheese that can be eaten as is, crumbled on tacos or (and this is one of my favorite ways to prepare it) grilled. It gets a little creamier when grilled, but still holds its texture (like halloumi).

Queso Oaxaca
I like to refer to this as the Mexican version of string cheese. It has a taste similar to mozzarella and is just as stringy as those pre-packaged snacks. It comes in a ball, often coiled around itself just begging to be unwound and devoured. Oaxaca melts well, making it ideal for treats like quesadillas. 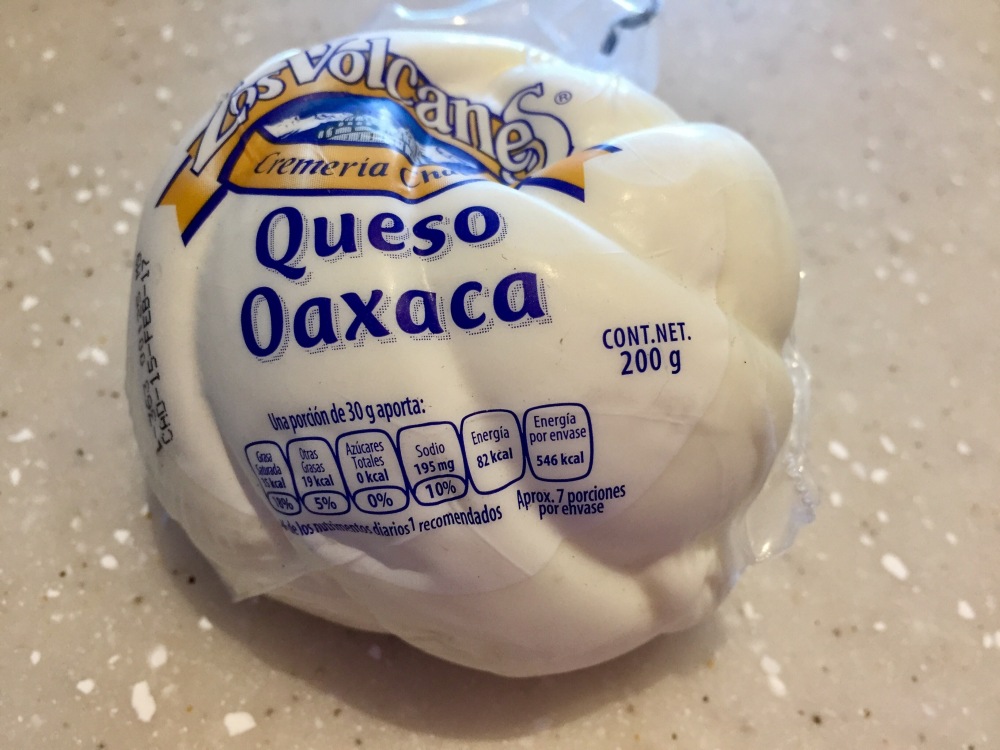 Nopal
Nopal is one of my new favorite vegetables. In the U.S. it’s more commonly known as prickly pear cactus. Here, you can buy both the paddles (without the prickles) and the fruit. The paddles are often used in tacos, burritos, quesadillas and other savory dishes, while the fruit can be baked up like an apple with raisins, cinnamon and sugar (just don’t eat it raw—it is EXTREMELY sour). 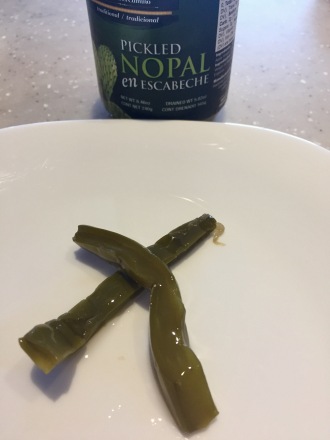 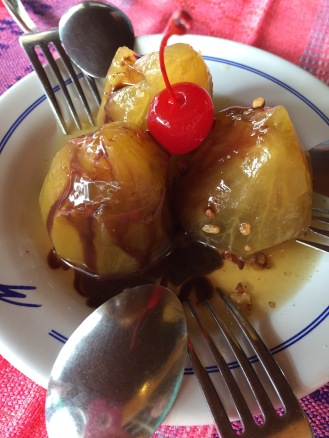 Nopal baked with spices and raisins

There are other fun and interesting things I find at the grocery store, but those are the foods we’ve grown particularly fond of and buy on a regular basis. Have you been to grocery stores in other countries? Let me know in the comments what your favorite finds were.