It’s been a few weeks since I’ve written. I wish I could say it’s because we’ve been so busy traveling and exploring that I haven’t had time to post an update. Unfortunately, it’s because my dad lost his battle with cancer on March 9. 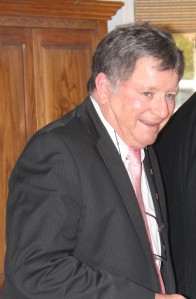 Dad was first diagnosed with Burkitt’s Lymphoma, an aggressive form of cancer that is rare in adults, back in July 2015. He went through six tough rounds of chemotherapy over the next several months. In November, his doctors declared him cancer-free.

Sadly, he started getting sick again towards the end of January. He stopped eating, was experiencing confusion, lost all of his energy and was constantly cold. My mom finally convinced him to go to the ER a week before Matt and I were scheduled to go visit them. The doctors began running all kinds of tests and were still running them a week later when Matt and I arrived. Though they found a mass in his brain, it wasn’t until the end of that second week that he underwent a brain biopsy to confirm that the Burkitt’s was back.

Looking back, our trip at the beginning of February couldn’t have been better planned. We were able to do a gender reveal with my parents so my dad knew he had a granddaughter on the way. We were also able to talk with him about our life abroad and the new house he and my mom were in the process of buying. He was able to take a couple of walks that week—and, though they were just around the hospital grounds, it was the last time he really had the strength to enjoy the outdoors and being able to walk mostly on his own (with just the aid of his walker).

Dad’s oncologist was initially positive and recommended three rounds of some of the most intense chemotherapy the human body can take. My dad bravely underwent the first round, which included several days of getting his sodium down to a level that would help protect his kidneys during the treatment, a 24-hour chemo drip and a couple days of flushing his body of the chemicals after he was done with the drip.

We held our breath, waiting to see any sign of improvement, but dad continued to decline. He grew increasingly confused (forgetting everything from the date to what he did just an hour earlier in the day) and began to lose further control of his body. In the space of just a couple of weeks, he went from walking to not even being able to get out of his lazy boy recliner in the family room.

We prayed it was just a case of “things getting worse before they get better” and scrambled to get my mom the extra help she needed to care for dad, starting with in-home nursing and eventually researching assisted living facilities. At this point, even if the doctors cured the cancer, we had no idea if my dad would ever be the same again.

The latter weeks of February were some of the most emotional and stressful I’ve ever experienced and I can’t even compare what I was going through to what my mom was dealing with on a daily basis. I struggled with the distance and the guilt at not being there physically to support my mom as she cared for my dad. I tried to do as much as possible from afar—from researching and getting more educated on the treatments and outcomes we might face to checking in with my mom on a daily basis to provide moral support and anything else she might need that I could tackle remotely. I still felt helpless.

My heart was breaking to see this man who’d always been so strong, growing so weak and thin at the hands of cancer. We attempted to Skype the week after he had his last chemo treatment, but his voice was so hoarse at that point that my mom had to translate just so I could understand what he was saying.

I was scared that dad would never meet my daughter and that, with my rapidly progressing pregnancy, we wouldn’t be able to make it back out to Arizona to say goodbye if he never recovered. It was all I could do to put on a brave face whenever I talked to my parents. Matt, however, saw me crumble the moment I got off the phone or computer–and even took over for me on a few occasions when I needed to gather myself before continuing the conversation.

On February 28, just about three weeks after the doctors confirmed the Burkitt’s had returned, my dad couldn’t even get from his lazy boy chair to the air mattress he’d begun sleeping on when the trip back to the bedroom became too much. He was supposed to get his next round of chemo that coming week, but we were waiting for the doctor to confirm the day. We decided we couldn’t wait any longer and my mom called his oncologist first thing the next morning. He booked my dad into the hospital right away.

The team of doctors began immediately to try to get my dad’s sodium level down so they could start the chemo, but nothing seemed to be working. They decided to do another scan and that’s when they discovered, not only had the original tumor more than doubled in size, there was a second tumor growing as well. The oncologist told my mom she needed to call the family in. Unfortunately there was nothing more he could do. My dad was a fighter, but the Burkitt’s was unrelenting this time around.

Matt and I had driven to Luxembourg for the weekend for a little distraction from the stress and anxiety of waiting to hear the outcome of my dad’s tests. Once we got the news that my dad had only days left, however, we began scrambling to find a way to get back to Arizona. The biggest stressor was trying to get ahold of my OBGYN to see if we were okay rescheduling our major second trimester scan that we were booked to fly to Toulouse on Tuesday to get.

Though it took us until Monday morning to get ahold of the doctor’s office, we drove home right after mass on Sunday and began packing. In the wee hours of Monday morning, we Skyped with my dad and the family who’d already made it there to be with him, including my brother, his sister and two of his brothers. My dad was unable to talk, but he was alert enough to see us and even gestured at the screen as he struggled to say something. We told him we loved him and that we were on our way to see him as quick as possible. We even let him be the first to hear his granddaughter’s name (which we are keeping a secret until she is born).

That was the last time we saw my dad fully alert. A few hours later we got ahold of my doctor’s office and got the okay to reschedule. We immediately booked the first flight we could get from Frankfurt to Arizona, grabbed quick showers and dashed to the airport. The 14+ hours of travel that followed were some of the most agonizing in my life as we wondered whether we’d be in time to say goodbye.

Thankfully we made it. Though we learned there’d been a scare shortly after they moved my dad to the hospice where he spent his final days, he hung on. We stayed by his side from Monday evening until Wednesday morning when he took his last breath, ducking out just briefly to grab showers at my parents’ house. His final moments were quiet and peaceful and he passed early in the morning on March 9 surrounded by my mom, brother, Matt, me and his dog, Lily.

This was a tough post to write and I realize it may be a tough one to read, but, for better or worse, it is part of our expat journey. One of the toughest choices you make as an expat is  moving far from your family. It’s times like this that make that distance ever more evident. Thankfully we were able to not only spend time with my dad in early February while he could still walk and talk, but also to be able to be there to day goodbye.

I dedicate this post to my dad, who  lost his fight with cancer way too early at the age of 65, as well as to my mom who stood by his side for 41 years and tirelessly took care of him to the end.